It's a miracle! A Zac Efron movie that looks watchable 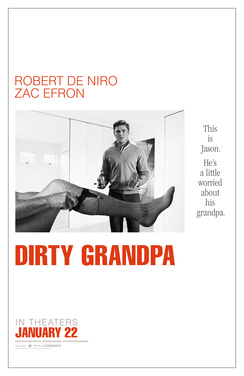 Tim and I have differing opinions on the trailer for Dirty Grandpa that just debuted. He claims that it's "shockingly good," while I tend to take a more reserved approach.

It's hard to impress when the bar is literally on the ground, which after We Are Friends let's face it, Zac Efron isn't capable of carrying a film in the slightest. But his co-star in Dirty Grandpa is definitely more than worthy of such praise.

Robert De Niro has sort of found a little bit of a career resurgence thanks to his turns in comic films such as Meet the Parents and The Intern. In this, he plays the titular character who takes a road trip with his grandson when grandma (his wife) passes away. Hilarity ensues when Zac Efron's character learns that his gramps is just another dirty old man who wants to party until someone gets pregnant.

Again, it was better than my expectations, but that's not really saying much. Sadly yes, Zac Efron takes off his shirt and flexes which must be written into his contracts given their regularity in his films. It's almost getting to be as distracting as looking for the Alfred Hitchcock cameo.

Did I just compare Zac Efron to Alfred Hitchcock? I think I'm going to be sick. While I take care of this, check out the first trailer for Dirty Grandpa below. The film hits theaters on January 22, 2016.