New trailer: The man behind 'Saw' and 'Insidious' gives you 'Cooties' 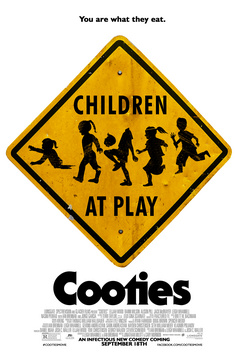 Outside the world of horror fanatics, not many know the name Leigh Whannell. He's the man -- yes, Leigh is a man -- who wrote Saw 1-3, Dead Silence, and the Insidious films. He's also an actor who has appeared in many of those same movies. The Aussie even had a part in 2003's The Matrix Reloaded.

Showing us exactly how twisted his mind works, Whannell now gives us Cooties. Cooties is a dark comedy about a mysterious illness that takes over an elementary school. Imagine a zombie film with nine-year-olds in place of the brain-eaters. Let the just released trailer give you a better understanding.

Cooties stars Elijah Wood, Rainn Wilson, Alison Pill, and Jack McBrayer as teachers confronting the epidemic. Whannell once again has a small role in the film. Cooties will arrive in select theaters on Sept. 18.

Whannell has another film this summer. He makes his directorial debut (along with writing the script and co-starring) in Insidious: Chapter 3. It debuts on June 5.

Oh, an important footnote. You now have Cooties. You must share this article and trailer with someone else. (No tradebacks.)