'Crimson Peak' trailer will spook you 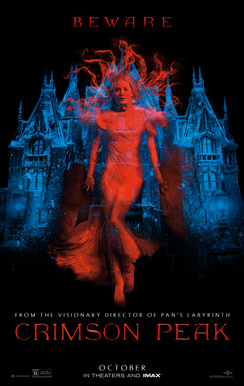 We spend a lot of time on this site talking about the huge box office hits that seemingly dominate the local megaplexes each and every week, but they really only account for maybe 5% of all of the films released by Hollywood each year. The vast majority of films get little to modest box office success or none at all, but that certainly doesn't mean that they are inferior movies.

Quite the contrary, almost all of my favorite films in the last decade such as Safety Not Guaranteed, Mud and Silver Linings Playbook were all relatively smaller films. These films are the ones that resonate highly with me and perhaps it has something to do with the sense of adventure in "discovering" them.

Crimson Peak is certainly not a small film as it is directed by Guillermo del Toro, but it's a return to more modest means after the filmmaker's last blockbuster Pacific Rim. As you'd expect, I'm more of a fan of del Toro's smaller films such as Pan's Labyrinth where his trademark visual style is more on display.

Again Crimson Peak is positioned to be a huge release in October, but relative to 2015 and its super films, it's probably not on many top 20 most anticipated films of the year lists. But that might change after they see the trailer below. Guillermo del Toro's visual style is a perfect match for horror and suspense and this trailer is a great example of delivering just the right amount of fright to get us intrigued without giving away too much.