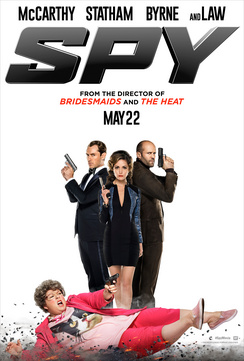 This Valentine's Day, instead of dragging your date to the latest Nicholas Sparks romantic film (you'll have to wait until April for that), there's an interesting new twist on romance in the form of Fifty Shades of Grey. Well, maybe it's not a new twist per se, but it's definitely new to mainstream film.

But is this just a sampling of what 2015 will offer?

In fact, the year is already off to a risquÃ© start with the first episode of season four of Girls. A show that has demonstrated time and again that no issue is taboo proved it yet again with a rather graphic (even for cable TV) demonstration of oral pleasure of one's backside.

Sorry, that's about as tastefully as I could put it.

So, it appears that women are ready to turn up the raunch factor in 2015 and as far as I'm concerned, bring it on. In the past, the raunchy comedies have always seemingly focused on male casts such as The Hangover, even though the audiences for these films are pretty much split down the middle.

There just seems to be this archaic notion that women shouldn't curse and should be composed at all times. To that, I offer the red band trailer for Spy.

I'll be honest, I didn't know much about the film before watching the trailer other than it was the latest in a long line of Melissa McCarthy/Paul Feig collaborations. And sure, Bridesmaids and The Heat were rated R, but there looks to be huge difference between those films and Spy. Heck, everyone got an "F Bomb" in the trailer, from Jason Statham to Rose Byrne to McCarthy herself.

And McCarthy's joke about the limp unicorn actually had me laughing louder than I have in a long time to a trailer.

So, does this mean that 2015 is going to be the year women break out and be as raunchy as men? I hope so, because there's comic gold in those hills just waiting to be mined.