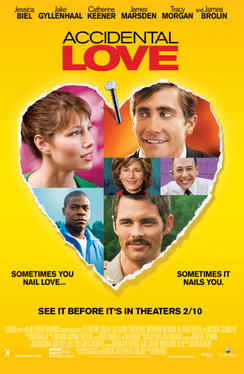 I love movies. That's not really a secret, but I do have a little passion side project that rears its head every now and then. I have a soft spot for films that for one reason or another end up on the proverbial Hollywood shelf.

Last year, you may have read our piece on Knights of Badassdom and all of the trials and tribulations that film went through to finally see the light of day, albeit still not in the way that the director intended, but that's a story for another day. Like Knights of Badassdom, Nailed was another film that was hit with shady financing that forced it to shut down filming four different times.

There were creative differences, re-casting and all the other hallmarks of a film destined to never see the light of day. Back in 2012, The Playlist summarized events in a great story that ended with the sad prediction that the film wouldn't ever be released.

Nailed is back, sort of. With the new title Accidental Love, it seems that Millennium Entertainment has stepped up to the plate to insure that this film will eventually see a proper release, albeit one that will most likely be much smaller than originally planned. But yet, the cast is still the same and while it's not in peak demand like it was six years ago, Jessica Biel, Jake Gyllenhaal and James Marsden are still solid draws.

David O. Russell has been completely removed from the film, which is sad really given that even in the trailer released today, you can still see some of his obvious influence. But ultimately, this is probably the right decision. A lot has changed since the film started production in 2008 and the existence of Obamacare sort of undercuts the political message of the film a bit.

But still, this seems like the bridge film between I Heart Huckabees and The Fighter for Russell both in tone and thematics, so I'm sure I won't be the only who will still include it in the David O. Russell library, even if it has an asterisk by it.