Chris Hemsworth does battle with Moby Dick in new trailer 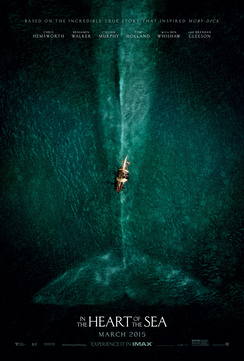 The only problem with 2015 being so massive is that there are going to be films that will, unfortunately, be lost in the shuffle. To give you an idea, In the Heart of the Sea is a Ron Howard film starring Chris Hemsworth that tells the real life maritime incident that provided the basis for Herman Melville's "Moby Dick."

The supporting cast is great with such venerable actors such as Cillian Murphy and Brendan Gleeson rounding out the lineup and yet, no one is talking about it. No one.

A lot of that has to do with it being a 2015 film. It's set for release on March 13, a mere three months from now and you would this was the latest release from Uwe Boll and not two-time Oscar-winner Howard.

We could write an entire story about overlooked films in 2015 and we just might do that. These aren't your normal sleepers that come out of nowhere that we try to highlight every year, no these are films that should be top 20 box office earners any other year, but might get lost among all of noise of 2015.

Hmm, I might have talked myself into writing that story. Check back in a couple of weeks and I'll share what I've found. Until then, here's the latest trailer for In the Heart of the Sea which is probably the biggest action film that you won't see in 2015.