On its 15 year anniversary: How 'Fight Club' changed my life 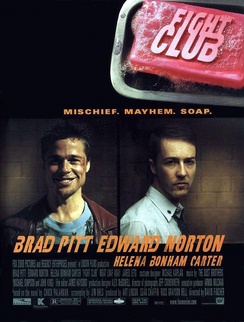 While I think that I possess a great memory, I'm not real good with dates. For instance, if you asked me what I was doing on February 16, 1994, I wouldn't have a clue. Well, I mean I could guess that I was probably in class at Butler, but the date is meaningless to me. But there are a few that stand out to me.

October 15, 1999. Sitting in a dark theater not realizing that my life was about to change forever.

I had always been a fan of movies and at that time, I was going through a bit of transition in my life. I was celebrating my one year anniversary working for a video software distributor and what I like to refer to now as my "training marriage" was starting the rapid decline that would result in a divorce and a move to Nashville all in the next 18 months.

But I didn't know any of that then. All I knew then was that a couple of my movie buddies had called me up and were itching to see the latest film from David Fincher. I loved Seven and The Game, so I was in.

It turned out to be the most influential 139 minutes of my life. Not to bore you with the details, but my first marriage had pretty much converted me into Edward Norton's Narrator and this film left me with the courage to become my own Tyler Durden.

No, I didn't start a cult or even get into fights with myself. It was more the PG version of Tyler Durden. I realized that getting married didn't mean a lifetime of subjugating my manhood to the whims of my wife. So, I started to grow back my backbone and my inner Tyler Durden came to the surface.

Unfortunately, my wife didn't approve and my own persona Project Mayhem ended in my first divorce. It's ok really, hindsight being what it is, that was the best thing that ever happened to me.

More importantly though, the film had sparked a revolution within me. I had always been an avid reader, but like most people who seek higher education, college ruined me on it. Surprisingly, Fight Club actually turned me back onto reading. Specifically, it introduced me to my soon-to-be favorite author of all time Chuck Palahniuk.

After watching Fight Club, I picked and read everything that he's written both before and since. Ironically though, I've never mustered the courage to actually read the book upon which Fight Club is based. I know you must think that to be the silliest thing ever, but let me try to explain. I realize that in almost all cases, the book is better than the movie, but for me and for that movie, I refuse to believe it.

Despite loving everything that Chuck has ever written and longing for his next words, I refuse to go back and read "Fight Club." It's weird, but the movie is so special to me and reverberates on such a deep level with me that I'm actually afraid that if I go back and read the book, it will ruin the movie for me.

I know that's weird and yes, I know the main differences between the book and the movie, but there's just something magical about that film and I refuse to even risk losing that magic by reading a book that I would almost assuredly enjoy.

Beyond introducing me, indirectly, to my favorite author, Fight Club cemented Fincher as one of my all-time favorite directors. I've loved every one of his films and like Palahniuk, he just has a certain innate ability to speak to my soul. This experience also confirmed to me that film is my passion in life and as I mentioned the next 18 months of my life were filled with many transitions and new experiences.

Fight Club serve as my lighthouse as I navigated a new position in the video distributor and then that company being bought out by my current employer. Through it all, I channeled my inner Tyler Durden and he helped to guide my decisions. Thankfully, it all worked out or I wouldn't be here right now writing this story that maybe a few thousand people will see.

And yet, that's sort of the point. Life is a weird, funny journey and when we look back, we are often surprised by the guideposts that we find. Fifteen years ago as I grabbed my popcorn and soda, I would have never guessed that the next two hours would shape my future so completely.

Oops, I think I just broke the first rule of Fight Club.