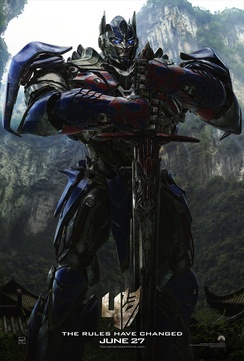 I have to admit, I wasn't a big fan of director Michael Bay's first three Transformers movies. The Shia LaBeouf-starring franchise just seemed hokey to me.

I know my opinion is in the minority as the films were all blockbusters making $319, $400, and $352 million at the U.S. box office respectively. But on the other hand, Bay and company had to realize a reboot was in order.

Gone are LaBeouf, Megan Fox, Rosie Huntington-Whiteley, and everyone else. This summer's Transformers: Age of Extinction is a new generation of Transformers movie.

Take a look at the just-released teaser trailer:

Of course that's Mark Wahlberg in the proverbial driver's seat. Nicola Peltz is his beautiful young daughter. Also along for the ride (I love using vehicle puns) are Jack Reynor, Stanley Tucci, and Kelsey Grammer. Transformer purist, you can rest easy. Longtime Optimus Prime voice Peter Cullen returns for this one.

What do you think? Are you excited for this new Transformers series vis-a-vis the previous three? Do you agree that Wahlberg gives the franchise a much needed jump start? (More puns! And a literal one this time!)