Monday Morning Mixer: It's a big 'Ride' for sure 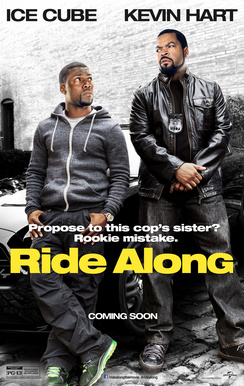 It's been a long two weeks and things around Hollywood continually change. I know that we were off unexpectedly last week and that was completely on me. We had to put our dog to sleep last Monday unexpectedly and I took some time to mourn him a bit.

Mojo was a great dog and cut down way too early by cancer. What makes it even more difficult is that he was easily my two-year-old daughter's best friend and as those of you with children can relate, it's doubly heartbreaking when something like this happens.

But, that was last week and now it's time to look ahead, well back, at the weekend that was in Hollywood. Grab a cup of your favorite hot beverage and dig into this week's MMM.

We never got a chance to talk about Lone Survivor last week and its stellar, if not unexpected, performance at the box office. Most films that open in January aren't given much of a chance to succeed, but Lone Survivor proved its mettle amid a hot awards season race.

In its second weekend, it took a record-breaking performance to unseat Lone Survivor, but don't think this movie was a one-week wonder by any stretch of the imagination. Lone Survivor took in $23.2 million and looks to cross the $100 million mark this weekend. It seems that we may have missed one in our top box office performers of 2014 list. When the dust settles, I fully expect Lone Survivor to land in the $140 million range, just outside the top 15 for the year.

We've teased it long enough, it's time to get to this weekend's big winner and that would be Ride Along. With its record-breaking haul of $41.2 million, Ride Along is now officially the highest opening film ever for January, eclipsing Cloverfield's $40 million in 2008. There's nothing really original in the half buddy cop, half urban comedy film, but it's that simplicity that allowed it to resonate with audiences.

It also doesn't hurt that Kevin Hart's star profile is on a bullet trajectory straight up at the moment. Of course, you still have to market the film well and I can't see the previews for this film without thinking of the dud that was Cop Out despite having a similar storyline and an outrageously funny comedian whose star was on the rise as a co-star.

At the end of the day, this might be yet another film that we missed on or we simply misread how big the big box office is going to be this year. Either way, I can see Ride Along cruising to a cold $150 million before its ride comes to an end.

Family film The Nut Job was a pleasant surprise with its $20.6 million, but Jack Ryan: Shadow Recruit failed to live up to its standard with only $17.2 million in receipts for the weekend. The former over-performed expectations thanks to a fortuitous scheduling SNAFU in which it was the only animated family choice since Frozen came out. Speaking of the Disney picture, Frozen still did pretty good this weekend with $12 million and moved up to a total haul of $333 million.

Jack Ryan, on the other hand, was more a victim of release date roulette. The Jack Ryan reboot was originally slated to be released on Christmas, but moved back a few weeks when fellow Paramount title The Wolf of Wall Street needed that date t qualify for the Oscars.

The move worked out pretty well for The Wolf of Wall Street as it snagged five Academy Award nominations last week and looks to surpass $100 million in box office in the next couple of weeks. Devil's Due continued the bad year for horror films by only managing $8.5 million in a seventh place debut.

After last week's Academy Award nominations, we thought we had a pretty good idea on how the Oscars would shake out, but this weekend's awards circuit events muddled up the water more than ever. Things seemed to be on track Saturday when American Hustle took home top honors at the SAG awards. Last night was minor earthquake when the PGA awards produced a tie for Best Picture. The funny thing is that neither of the movies tied for the top prize was named American Hustle. No, Gravity and 12 Years a Slave took home top honors from the awards show that most closely mirrors the Best Picture award winner.

In perhaps the biggest non-news item of the weekend, J.J. Abrams confirmed that the script for Star Wars: Episode VII is complete and that it's "full steam ahead." He also confirmed that he has talked to actor Jesse Plemons about a role in the film. That piece of news is rather intriguing because I'm pretty sure it's the first time that Abrams has confirmed a casting meeting with any actor and well, I have some issues with Landry from Friday Night Lights being in the next Star Wars film.

In case you were all concerned about Zach Braff and his financial well-being after he turned to Kickstarter to finance his latest film Wish I Was Here, you can breathe easier this morning. Focus Features has purchased the film after its success Sundance debut this weekend for $2.75 million.

So, Braff and company raised $3.1 million from supporters to make his film and instantly clears $2.75 million off the top and I imagine the deal has some sort of back-end components as well, meanwhile, his supporters get a t-shirt (or the like). Again, I'm not really bagging on Zach Braff and kudos to him, but I just don't see how he couldn't have approached a studio and gotten basically the same deal ahead of time. It seems to me that the fans are the ones losing out here.

Well, that wraps up another MMM. Sorry to end on such a meh moment, but sometimes that's what life gives you. Have a great week and until next time, Mix Well!