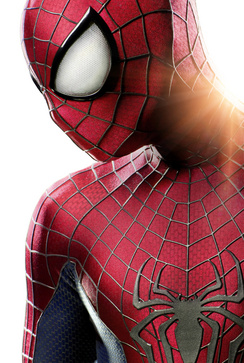 Before all of the dancing in Spider-Man 3, the real problem in the film was trying to coordinate all of those villains into one cohesive storyline. Naturally, the experiment failed and Spider-Man 3 is best known for making the wall crawler appear more like an extra from Saturday Night Fever than a seasoned crime fighter.

Of course, biting off more than you can chew is sort of the calling card for comic book movies, so I suppose we shouldn't be surprised to see that Sony is back at it in The Amazing Spider-Man 2. The main villain is Electro played by Jamie Foxx, there will be appearances by Rhino (played by Paul Giamatti) and the Green Goblin.

If that weren't enough enemies for one high school student to handle, don't worry because the trailer below also hints that Doctor Octopus and Vulture could be on tap for a cameo or a larger role in The Amazing Spider-Man 3 or The Amazing Spider-Man 4. Even more intriguing, there is one brief moment in the trailer in which six numbered doors are raised somewhere deep in the bowels of OsCorp. That, of course, makes me think that they might be teasing an appearance of the Sinister Six.

Tim and I both expressed some concern over Jamie Foxx as Electro, but we both agree that the action sequence between Electro and Spider-Man was quite impressive. We also both agreed that Dane DeHaan was an inspired choice as Harry Osborn. Given that there are two more sequels beyond this one on the calendar, I'm sure that they'll have plenty of room to let things work themselves out nicely on the big screen.