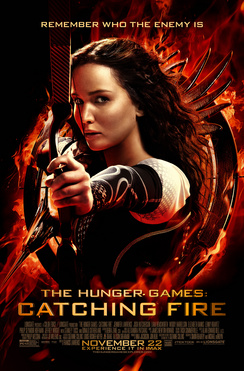 When I left work Friday night, I knew that one thing in life was absolutely certain. The Hunger Games: Catching Fire would be sitting in the top spot at the box office this morning. The only real question was, how much would it make?

Well, I'll spoil it a bit for you, it made a ton. But, we'll get there in a moment. What is interesting though is did it live up to all of the enormous expectations and will it continue to perform at such a high level?

The true measure of any great sequel is, does it outperform its predecessor at the box office? No matter what number Catching Fire did, that's still going to be a tough nut to crack. Only 17 films to date have made over $400 million at the box office. The Hunger Games was one, but surprisingly, not a single Harry Potter film has done so.

Does the Hunger Games franchise have enough staying power to join only Christopher Nolan's Dark Knight sequels and George Lucas' opening chapters of his two Star Wars trilogies to break that lofty number? That's the question that we will try and sort out below.

Settle in and enjoy our MMM.

We teased you a bit with the headline and it's true. The Hunger Games: Catching Fire earned $161.1 million at the box office, a new November record for an opening. What makes this number even more impressive is that unlike many of the films that it bested, Catching Fire did not benefit from the more lucrative pricing of 3D, as it was only released in 2D.

In fact, this opening is so big that it's currently the fourth largest opening weekend ever, just slightly ahead of last summer's $160.9 million by The Dark Knight Rises. Of course, Catching Fire's numbers are based on estimates for Sunday, so it might officially end up in fifth place when all of the dollars are counted from yesterday. Either way, it's truly a massive opening that shouldn't be downplayed - but we'll try our best.

If you look at the rest of the top ten opening weekends of all time, you'll notice that the rest of them, save for the Twilight films, have opened during the summer. This is key, because competition during the summer months is more fierce, so films tend to burn hot and cool off fast. By contrast, films released at the end of the year tend to have really long legs. Both strategies can result in big box offices, just look at Titanic.

The question remains, is this opening good enough for Catching Fire? I think so, but I have to admit that I was a bit surprised that the final numbers weren't closer to The Avengers' $200 or this year's $175 million put up by Iron Man 3. From all of the anecdotal evidence, theaters were packed this weekend and business was swift, but Catching Fire only beat the original film's opening by $9 million.

Now again, that's not half bad considering that The Hunger Games is one of those mythical 17 films over $400 million lifetime box office gross, but you have to be wondering if Lionsgate was secretly hoping for something more approaching $175 million. The real test will come this week. The original film lost a massive 62% of its total during its second frame. With that type of drop, Catching Fire would be looking at a second weekend north of $60 million and a 10 day total of around $260 million.

Given that, will Catching Fire have enough steam to bank $140 million more during the rest of its run? At this point, I think December's competitive slate including the latest Hobbit offering will be its undoing. Catching Fire should enjoy the top spot for two more weekends, but I think it will drop hard after that. Internally, Tim and I thought Catching Fire would do $410 million and if it hits that number, I think it's a success, but I see it coming up short in the $380 million range which I think will be a bit of disappointment. Well, in as much as any film that earns $380 million can ever be considered a disappointment.

Believe it or not, there was another wide opening release this weekend. The brass at Disney thought it would be wise to release the Vince Vaughn starrer Delivery Man opposite of Catching Fire. As expected, it was merely a footnote in history, earning $8.2 million in its opening frame. Delivery Man will continue to fail to deliver before ending with a disappointing $22 million or so.

If you're a fan of Star Wars, then today's first quick hitter is for you. Actor Jason Flemyng, who was rumored to be in the running for a role in Episode VII a while back, created quite a stir when he Instagrammed a picture showing a page from his Star Wars: Episode VII script. While the picture was blurry and has been taken down from the actor's Instragram account, nothing is ever completely erased from the Internet.

As you can see from the link above, the page features two characters, John and Will, and they are scavenging for something. Obviously, one would hope that the character names are simply place-holders right now and that J.J. isn't completely Anglicizing the galaxy far, far away, but it does seem that Will might refer to Zekk, a scavenger in the expanded universe and good friends with Jaina Solo.

And finally today, I leave you with this video that may even evoke a few tears. It seems that over the weekend, the Family Guy family lost a key member to a tragic accident. Personally, I'm a bit offended as a hockey-loving fan and player that they chose to use hockey as the cause of his demise, but oh well. Until next week, Mix (those martinis) Well!