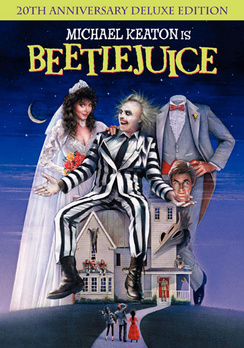 Tim and I have had a running joke when it comes to sequels, which one will hit the big screen first, Beetlejuice 2 or Ghostbusters 3? I've always been big on BJ2, while Tim has had high hopes that we'd go bustin' some ghosts first.

It looks like I'm going to win, if you believe the news that started leaking out today. Variety is one of many sources that are reporting that deals are starting to fall into place for Beetlejuice 2.

The best part? Those deals are said to include both Michael Keaton reprising his titular role as the foremost exterminator of the living and director Tim Burton taking up his spot behind the camera. If true, this is huge as Burton has been pretty much against sequels since 1992's Batman Returns and can you really have a Beetlejuice without Keaton.

The script is already written by Seth Grahame-Smith, who also penned Abraham Lincoln: Vampire Hunter and the Burton-directed film Dark Shadows. There's no word on the plot, but you can pretty much throw away that prequel idea that was floated about in 2001. Yep, we wrote about this potential sequel way back in 2001.

There's also no time frame for release, but since everything else is coming then, I went ahead and prognosticated that it will hit theaters sometime in 2015.