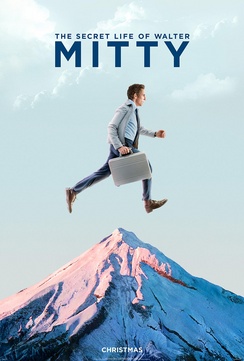 I'm not sure if there's a more perfect fit than the opening rift from Queen's "Bohemian Rhapsody" and The Secret Life of Walter Mitty.

Is this the real life? Is this just fantasy?

And so begins the latest trailer from the remake of the Danny Kaye classic based on a James Thurber short story. I'll be honest, I wasn't moved by the teaser trailer and last week's full-length offering was a bit flat as well.

Interestingly though, this trailer below which is being touted as the "Launch Trailer" is very similar to last week's trailer, but there's just something about the nuanced differences that make this one much more enjoyable.

The Secret Life of Walter Mitty is a story about a man who spends more time in his heroic daydreams than the mundane real world. The marketing push seems to center around Mitty making that push to get out and live the life that he always dreams about.

It's hard to say if the film will follow more closely with the short story or the 1947 film, which were quite different. What is known is that the film is completely updated for the present which makes for a very interesting case study given that alternate reality and technology would make Mitty's daydreams more real than ever before.