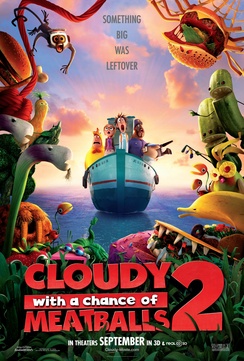 Well, here we are. The MMM has become the MAM yet again and I hate to cut things short, but other things are cutting into my schedule, so I feel bad that we won't be able to have our lengthy chat on the weekend that was.

On the bright side, there wasn't too much that happened, so it's not like we are missing much. So, let's get into it, shall we?

Cloudy with a Chance of Meatballs 2 performed admirably with $35 million in box office receipts. That's slightly better than the original's opening number of $30 million, but it has to be a bit disappointing for Sony executives who were expecting at least $10 million more.

Still, $35 million isn't too shabby and the film should end up with a bit more than its predecessor's $125 million. I think a total around $130 is very possible and would most likely be the quietest $130 million movie of all time.

Other newcomers were pretty DOA at the box office. Ron Howard's love letter to F1 racing, Rush, barely made it to the starting line with only $10.3 million. This film's performance is further proof that while films about fast cars (Fast & Furious 6) can be successful, films about formal car racing really don't move the needle too much. By the time this film crosses the finish line, I think that it might limp to $40 million which would be considered a win for this film as it stands now.

It would be impossible to have this story without mentioning the 2,000 ton meth-addicted elephant in the room. The TV series Breaking Bad had its series finale last night and from all accounts, it was well-received.

I never watched the series myself but according to Variety a lot of you did. The Final Season and Complete Series will make its way to home entertainment on November 26, just in time for the holidays!

So, if you're like me and want to check it out or you're a super fan, then you've got that to plan for.

Well, duty calls, so this will really be short. Until next time, Mix Well.