The art and science of quoting lines from a movie (plus a quiz!) 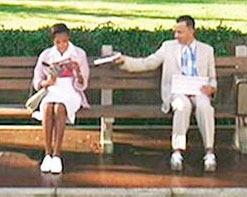 Quoting lines of movie dialogue is my favorite thing about the artform that is film. Yes, that's right. I enjoy quoting movies in my everyday life more than actually watching them.

Hear me out. Of course I love movies. I wouldn't be working here if I didn't. Watching movies is mostly a quiet, solitary experience. You may do it in a darkened room with lots of strangers but you can't really interact during the film. Heck, if your cell phone lets out a single beep, you're instantly chastised for it.

Reliving dialogue through quotes is the social byproduct of movie-watching. 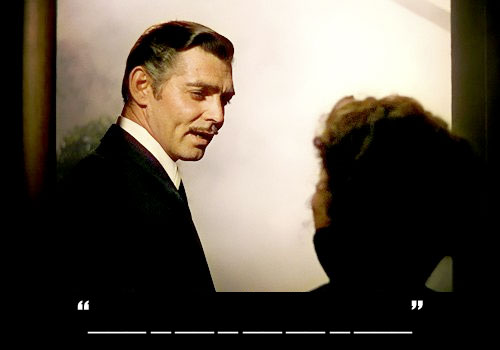 Indulge me in some big thinking for a second before I get to the fun stuff. You can call it my big social theory, if you like. Not that I'm an expert on the subject. But I do write things on the internet so I may as well be. Plus I've read a lot of things from people far smarter than me.

Reciting appropriate movie quotes serves an important interpersonal function. For the most part we're all strangers on this big blue marble called Earth. We're all searching for ways to relate to one another. We long for some commonality to bond us together and allow us to coexist. That fact should be obvious. That's why social media has become such a trend in recent years. We all lead busy lives yet we desire connections and a sense of belonging.

Meanwhile, culture is the product of our basic human need to express ourselves. We produce stories, art, music, and dance because it's our instinct to create things and communicate with our fellow human. I believe film is the greatest artform known to man. It collects many of these creative disciplines into a single piece that can be experience again and again. Classical music and literature dominated other times in our history. Today we have film.

But we can't always gather around to share a movie amid our busy lives. It's getting harder to even find time to critique films with friends. We have to recreate the experience in short bursts in order to share movies. That's where quoting dialogue serves its purpose. We stick lines into conversation here and there for a laugh but also to show some commonality and connect.

I'm not the first one to consider the psychology of movie quotes. Dr. Stuart Fischoff wrote a lengthy, three-part series in Psychology Today about the subject. Much of it drew from his own research a decade earlier. He says people love movie quotes (duh) and use them for "personal efficacy" (I call it 'relatability' but whatevs). Fischoff, et al, writes that people insert them into language as an easy way to express themselves. In other words they serve as verbal clip art. They are known phrases we can grab and plug in when our own words are hard to formulate. 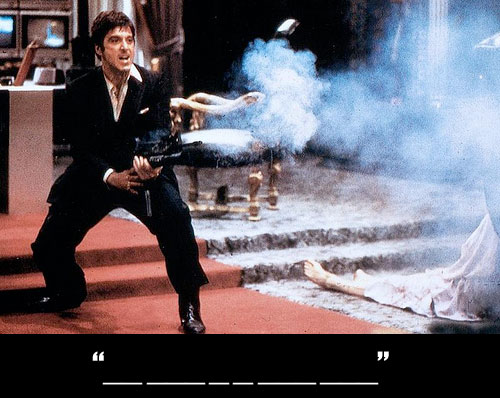 You can read his entire piece on Psychology Today's website. Part 1 examines how modern movies don't have the high quotability of their predecessors and TV has largely replaced that function. Part 2 dissects the different types of memorable quotes and how they serve various purposes. Part 3 talks about favorite quotes differ by age and sex. Most interesting about this final piece is that male characters much more likely to utter famous lines. How many quotable lines from female characters can you think of?

Fischoff isn't the only mind about movie quote science. Researchers at Cornell University did a study to determine why certain phrases become memorable while others are fleeting. They took popular lines from one thousand movies and compared them to lesser known dialogue by the same character. Then the researchers asked participants who had NOT seen those movies which line was more memorable.

They found that 75% of the time, people picked the memorable line. Again, the people playing guinea pig had not seen the movies so they had no idea of the lines' context or relative importance. From this they determined that there is something inherent to the lines to make them memorable. You can take the test yourself or just read more about the study. (I managed 11 out of 12 but the score doesn't really matter.) 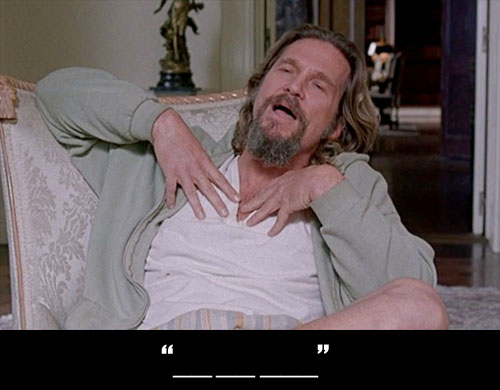 The researchers then compared those memorable lines to a set of common language phrases. The quotes contain distinctive words not in the regular lexicon. At the same time there are grammatical structures that are highly similar to normal speak, lots of pronouns. Plus quotes often contain pearls of wisdom. Here are a few popular lines I thought of that help illustrate this mash-up of simple phrases and uncommon words. Plus a few that use the fortune cookie-speak.

"Hello, my name is Inigo Montoya, you killed my father, prepare to die."

"Mama always said life is like a box of chocolates..."

"I've a feeling we're not in Kansas any more."

"May The Force be with you." 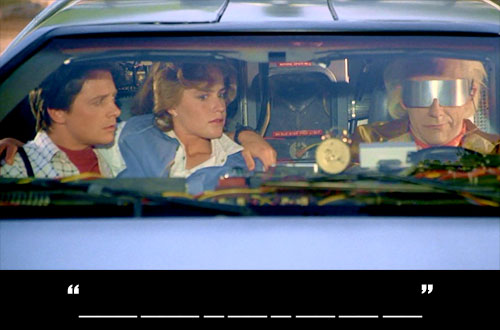 Now that we've examined some of the science behind movie quotes, let's look at some lessons in actually using them.

Movie quotes work well amongst familiar friends but they are even better with casual acquaintances or even strangers. You evoke a favorable memory in another person and instantly endear yourself to them. It's that whole common language thing. This effect is best illustrated by a funny Saturday Night Live skit from 1999. It uses a king of quotable movies, Caddyshack.

Of course it's all a joke. No one has ever gotten a job just from something as silly as quoting a movie. (Right?) There is a great deal of truth behind the laughs though. Power lies in sharing lines of memorable movie dialogue.

And the opposite is true as well. In that opening scene with Will Ferrell, Jimmy Fallon, Chris Parnell, and Horatio Sanz, a fun social experience turns awkward when one of the group can't join in. He's shunned from the group for not relating.

This gets to the art of quoting movies. You can master a situation by effortlessly inserting choice dialogue. At the same time you can fall flat on your face by doing it wrong.

As I see it, you can fail in one of three ways. You can fail simply because you haven't seen the movie being quoted. If it's a group situation and you're the only one who can't participate, you lose out. We'll call that the Horatio Sanz Effect, as in the video above. The lesson here: watch lots and lots of movies. 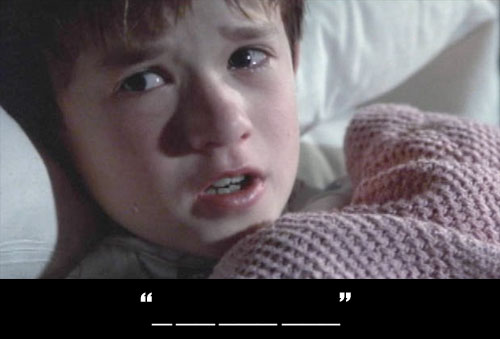 You can also crash and burn by misquoting a famous line. It may be the perfect situation in which to use a line but if you botch it, you will probably get called out. "Show me the dollars!!" "Hasta la vista, dude." "Go ahead. Make my afternoon." As they say (but not in a movie), close only quotes in horseshoes and hand grenades. The misspoken lines sound like nails on a chalkboard in comparison to the real thing.

The final way you can fail is to use a quote so obscure that the others in the conversation don't get it. This also gets to the point that older movies are much more quotable as it increases the familiarity. The Avengers may be the third biggest film of all time but a line like the following from the 2012 film may fall on deaf ears. "There's a shawarma joint about two blocks from here. I don't know what it is, but I wanna try it."

Going in the other direction, a quote's obscurity make work to your advantage with the appropriate audience. I've been working with my cohort John for long time and I know he'll get some very esoteric lines. If you know the source of either of these lines, consider yourself part of the club. "Hey Melio, a Fagabeefe!" "The Schnappster!"

In other words, "With great power comes great responsibility." If you are comfortable your listeners will catch a wild reference it will pay maximum benefit. If you're preparing a speech or just making small talk in an elevator it's best to stick with a classic like "Son, you got a panty on your head" -- though I hope you never find an occasion to use that in an elevator.

I hope you've learned to appreciate both the psychology and guidelines for using famed movie quotes. If you simply want to brush up on your expressions, there are a ton of online resources to help. Of course, the big daddy of them all is IMDb. Most movies have a page of memorable quotes to browse. There are at least three other sites that allow you to search their quote database: MovieQuotes.tv, Movie Quotes DB, and MovieQuotes.com. The site Anyclip will let you find and watch segments from popular movies including those with famous quotes. 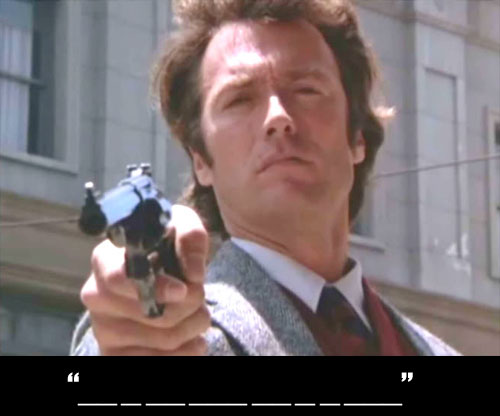 I'm sure you noticed the various movie stills sprinkled throughout this article. Did you notice how each snapshot almost instantly conjures the famous line spoken? Even if you've not seen that particular movie, you probably know the quote being referenced.

How many of these did you recognize? The answers are: (obscured here, mouse over to see them) 1. "Frankly my dear, I don't give a damn." Gone With the Wind 2. "Say hello to my little friend!" Scarface 3. "I'm the dude." The Big Lebowski 4. "Roads? Where we're going we don't need roads." Back to the Future 5. "I see dead people." The Sixth Sense 6. "'Do I feel lucky?' Well, do ya, punk?" Dirty Harry Some will mistake that last one for "Go ahead, make my day." but that's a different movie and scene. Bonus points for knowing the lines from the really obscure Midnight Madness and The Stoned Age.

If you got all six correct, you are definitely a movie quote nerd -- and that's a good thing. If you missed just one or two, congrats, you are well on your way to becoming one of us. If you missed them all, you're probably an alien from another planet. I suggest you re-read this article to become more acquainted with the human species.

I leave you with the one and only Homer Simpson. Allow this virtuoso to show you how quoting movies is done: