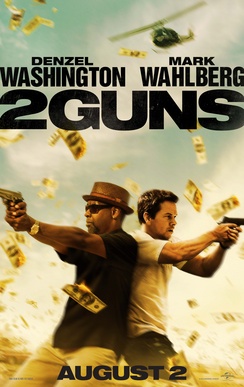 You know that you're in the doldrums of August when a movie that you've never heard of takes the top spot. OK fine, I had heard of 2 Guns before this morning, but it's not like anyone would admit to actually seeing it.

No, 2 Guns is that 2:00AM booty call movie that you secretly really like, but you make sure and wear a disguise to the theater.

There was a time when pairing up Mark Wahlberg and Denzel Washington would have guaranteed a nice opening weekend approachign $100 million, but this isn't 2001. Instead, it's over a decade later and let's just say that the shine has faded a bit on these two stars.

And yet, here we are with them teaming up literally and figuratively to take down the top spot at the box office. This can't end well, can it?

Well, sit back and grab a cup of Joe and let's find out.

August is always the weakest month of the summer. Kids are heading back to school, which I found out firsthand this morning. Seriously, when did schools start back up in July? What happened to summer break? Families try to cram in one last vacation before Labor Day.

All of this boils down to one lonely month at the megaplexes.

Of course, it doesn't help that the studios are feeding right into that stereotype by using August as the dumping ground for movies that would be right at home on the Island of Misfit Toys. Trust me, if Disney were to schedule Star Wars: Episode VII for August 2015, it'd still do tremendous business and have practically no competition for like two months.

But, that's the future and this is the present. The one where they still dump films to die a quiet death.

2 Guns opened up in the top spot with the aforementioned top-line talent and still was only able to bring in $27.4 million. Let's face it, Denzel's getting old and Marky Mark's six-pack is more of a keg these days. Audiences aren't clamoring over themselves like they used to for these two. Ten years ago, this film opens over $50 million easy just on name recognition alone.

Given the lack of competition though, I could see this film limp its way to $75 million and we will all be asking how it did that.

This weekend's other new arrival fared even worse. The Smurfs 2 opened in third place with a measly $18.2 million. Sony Pictures even moved the film from its original release date of June 22 to put a bit more space between itself and Despicable Me 2 to no avail it seems.

The original film opened with almost double the amount of box office ($35.6 million), so you can pretty much put a form in The Smurfs, they are done. The Smurfs 2 will struggle to make it to $60 million at this rate which is far below studio pre-release estimates.

So, remember when Juno came out and Diablo Cody was the hottest name in Hollywood and stripping? Well, a few questionable films later and she's back with her directorial debut that finally has a name: Paradise. In it, she finds a way to make Julianne Hough look ugly and Russell Brand to act compassionate. I'm not really sure which one would be more difficult. Regardless, the trailer for Paradise is as bad as you'd expect a film about a devout young woman burned horribly in a plane crash then takes the insurance settlement to live a little in Vegas would be.

Have you ever wondered if any of those film's set in the future ever got anything right? Well, as it turns out, we're still waiting for the flying car, but Starship Troopers did pretty good by getting these nine future things correct - more or less. The one thing that I'm still waiting to come to fruition is the co-ed showers. I guess we haven't quite evolved that far yet.

And finally today, remember when Patton Oswalt delivered his take on the new Star Wars film for the TV series Parks and Recreation? Well, the fine folks over at Nerdist decided to animate it. And yep, it's as good as you imagine it would be.

That's it for now, mix well!