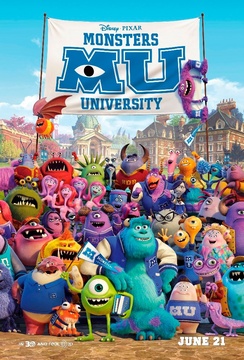 Before you say anything, technically Superman is an alien. He's an extraterrestrial-born being who is transported to Earth as a child, but still he's an alien, as are all of his invading Kryptonian buddies like General Zod.

So, my headline stands.

It was a big weekend at the box office thanks, in part, to the sizzling weather that drove people indoors for a bit a respite from the soaring temperatures outside. I know that I wish we could have joined them, but instead we have a toddler who is intent on spending as much time as possible outside.

This is a good thing. I think. Anyhow, while we were sweating in the heat, everyone else in America spent their time eating popcorn and watching films. Not a bad way to spend a weekend.

But today is Monday, which means that while you ramp up your work week, grab that cup of coffee and enjoy the Mixer!

Well, I'll tell you one thing, Monsters University is no Toy Story 3, but then again, few films are. Toy Story 3 and its opening weekend box office number of $110 million is still tops in Pixar land - but just barely.

This weekend, Monsters University opened with a stellar $82 million, good enough for the second best opening ever by a Pixar film. Interestingly though, while the opening was quite impressive, they actually sold less tickets this weekend that they did for the original Monsters, Inc. in 2001.

Of course, there are many reasons for this, not the least being that Monsters, Inc. opened in November where it's biggest competition was Jet Li's The One. For those interested, Monsters, Inc.'s $62 million opening would translate to about $87 million in 2013 dollars.

Still, the opening is quite impressive, especially considering the competition. The biggest competition for Monsters University, though, will hit theaters in a couple of weeks in the form of Despicable Me 2, when the Summer fight for family dollars will be in full-swing. It should be interesting to see which film earns more this Summer. Right now, our best guess for Monsters University is that it will hold on enough to challenge the $300 million plateau, which is still less than the adjusted for inflation original gross of $350 million for Monsters, Inc.

Oh, I also promised you zombies in the headline, didn't I? Those would be the scores of undead that populated this weekend's second place film World War Z. SPOILER ALERT: The Z stands for Zombies. The Brad Pitt film also exceeded expectations by banking a cool $66 million opening.

I'm sure that you'll be surprised to learn that this is the largest opening weekend for any Brad Pitt film. It's true, I was just as surprised as you were when I realized that. It's funny, we all assume that Pitt is a bonafide A-lister (and he is), but his films haven't enjoyed breakout success at the box office.

Of the 30 plus films on Brad Pitt's resume only 10 have made more than $100 million at the box office. And not a single film has broken the $200 million barrier.

Well, World War Z won't crack the $200 million barrier for Pitt, but it's all but guaranteed to pad his numbers for films over $100 million. We are sort of in uncharted waters here though as this is really the first big budget horror film to have any real success during the Summer. Despite tremendous competition on the horizon, I think the film will still finish with close to $150 million.

And that leaves us with the aliens, er superheroes, in Man of Steel. Remember last week when I said that the jury was still out on this one? Well, the jury returned its verdict and it's not good news. With a massive drop-off in the 65% range, Man of Steel only managed a meager $41.2 million in its second weekend.

The good news is that the front-loaded business means that it has already surpassed the $200 million mark, but the bad news is that it might struggle mightily to get to the new milestone. Man of Steel has already flown by the total box office number of Superman Returns ($200.1 million), but I have to think that the big wigs at Warner Bros. were hoping for at least $300 million or more.

As the literal poster child of the DC faction in the war of comic book movies, a successful Superman franchise is the cornerstone if WB ever hopes to rival the success of The Avengers with their own JLA film.

Elsewhere, Now You See Me is set to surpass the $100 million mark this week, which is a huge victory for them. This is the End held on to a nice chunk of its audience and it could have just long enough legs to get to $100 million. Iron Man 3 did make it over $400 million, joining fellow Marvel comics alums Spider-Man & The Avengers in this exclusive club (Membership: 17 films).

George Lucas got married this weekend. Lucas and fiancÃ©e Mellody Hobson tied the know in Lucas' home area northern California. Congrats George! And yet, I can't read that story without thinking of "Lucas in Love."

Jim Carrey has always seemed like an odd bird to me. Perhaps that's because he's such an character in many of his films. Regardless, this latest turn might be the oddest. Despite petitioning film makers to be included in Kick-Ass 2, he came out against his own film this weekend via Twitter. You can read the tweets below and while we certainly can understand his feelings, he did see the first film and knew what he was getting into.

I did Kickass a month b4 Sandy Hook and now in all good conscience I cannot support that level of violence. My apologies to e

I meant to say my apologies to others involve with the film. I am not ashamed of it but recent events have caused a change in my heart.

And finally today, this one hit me hard. I'm not sure why, but learning that James Gandolfini had died just hit me in a big bad way. He was always a joy to watch in films and he's in one of my all-time favorites, True Romance. I found this tribute online and I thought I'd share with you. Godspeed Tony Soprano.

Until next week, mix well!