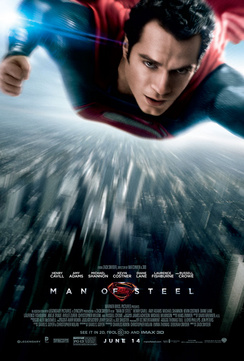 It's the Monday Morning Mixer.

Well, this is the day that we've been waiting for. Today would tell us one or another which way the Summer of 2013 would be remembered for. Would it be the train wreck that so many thought it would be after last Summer's stellar performance. Or would it simply be a further indication that the box office is well on its way to recovery?

I'm not quite convinced of the prognosis, but one thing is sure, this Summer is going to be alright.

With the early reviews of Man of Steel clearly falling either really positive or really negative, it was anyone's guess as to what the public at large would think. In the end, it seems that the movie is as divisive with them as it is with the critics.

However, this did very little to dampen the high expectations at the box office and Man of Steel was up to the task. 2013 is almost half over, sit back and enjoy today's MMM.

This weekend's box office story is all about that doomed planet Krypton and their fair son sent to Earth for a new beginning. I think Man of Steel had all of the right things going for it. It had the hip, hot director in Zack Snyder. The film enjoyed the guiding touch of producer Christopher Nolan, who knows a thing or two about rebooting a comic book franchise.

While every Summer is jam-packed with huge tent-pole film, this Summer's offerings pale in comparison to what is on the docket in 2014 (Transformers 4, X-Men: Days of Future Past) or 2015 (The Avengers 2, Star Wars: Episode VII), so Man of Steel was perfectly positioned to cash in on the comic book frenzy. And yet, there's just something about Superman that seems almost cursed.

Curses be damned because Man of Steel set a new June record for highest opening weekend with a gross of $125 million. It's three day (plus Thursday sneaks) haul is more than Superman Returns five day haul of $84.6 million. Even when you adjust for inflation and ticket price escalation, the new film beats the last Superman film by at least $20 million in two fewer days.

I think Man of Steel really helped itself out this last month or so. The last couple of trailers seemed to focus solely on the heavy action of the film, while the previous trailers showed more of the origin story that does play a huge part of the film. The problem for any Superman is where to draw the line on back story and superhero action.

While many comic book superheroes are clouded in mystery to the average movie goer and require a lengthy origin story, even the lay comic book fan can tell you about Kryton, Kansas and speeding bullets. Of course, as Superman Returns found out, you can't simply forgo the entire back story either. It seems that audiences want a nice balance and, if this weekend is any indication, a bit of something different in the back story to change things up.

Naturally when you mess with any origin story (let alone one as widely known as Superman's), you're bound to get some flack, but it appears to me that the masters Snyder and Nolan got it right this time around. I'm torn on this one, I could see it having long legs like The Dark Knight Rises and ending up with $400 million or so, or I could see it being a quick burner that struggles to get $300 million. I think the jury is out on this one until we see next weekend's numbers.

The other new release this week, This is the End finished so far in second place that Superman lapped them at least five times. That being said, the $32.8 million that the comedy film took in was still quite impressive. Of course, it needs to make a ton of money to recoup all of the marketing money that Sony spent on it.

It seems that they played a new trailer or commercial every other day for the last month and yet, reports indicate that they didn't spoil the entire movie. I'm not sure how that's possible, but I learned long ago to never question anything as it relates to Seth Rogen. Good word of mouth and the counter-programming angle will help boost its total box office to over $100 million.

Elsewhere, it was a week of milestones for holdovers. Fast 6 and Star Trek Into Darkness limped over $200 million, while Iron Man 3 is quite literally one admission from going over $400 million in domestic box office receipts. Now You See Me continues to hold on in third place casting its biggest and best magic trick all Summer. The film looks to surpass $100 million soon on its way to $125 million.

I think that I will be keeping the quick hitters format that Tim originated as it allows me to both get this out in a more timely fashion and to give you more links to what happened this weekend. So, let's get to it.

Joss Whedon may have disappointed some Tom Hiddleston this weekend when he leaked that Loki will not appear in The Avengers 2.

Now that you've seen Man of Steel, are you ready for the sequel? The Wall Street Journal is reporting that Warner Bros. is already fast-tracking Man of Steel II. How fast? Try a release date next year. That's not all, the article also mentioned the possibility of a Justice League of America movie in 2015. Holy trinity of movies, Batman!

If you haven't quite gotten your fill on Superman yet, just wait. CNN has a report that Superman might be coming to a church near you. Apparently, Jesus was the original superhero. What's next? The Bible: The Comic Book? Oh wait, it already exists.

Kanye and Kim Kardashian gave birth to a girl on Saturday. In related news "Keeping Up With Baby Kardashian" is set to debut later this Summer on E!

Finally today, some news that actually makes sense. According to TheArnoldFans.com, Arnold Schwarzenegger is set to reprise his iconic character in the upcoming Terminator 5. In related news, Paramount landed the distribution rights to the film and might start film in early 2014. If so, that would put its release smack dab in the middle of, yep, you guessed it, 2015. The same site claims that one storyline for Terminator 5 involves sending a Terminator back to the middle 20th Century to try and kill Sarah Connor's parents before she was conceived. That's nice, a period piece Terminator.

Well, that's all for this week. Until next time, mix well!