Jennifer Aniston strips to save 'The Millers' 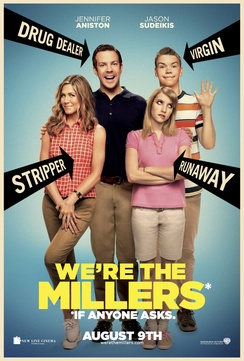 Here's a film that has been on our radar for a while now. In fact, Dannette included We're the Millers on her sleeper list of 2013 films. But, this is the first look that we've gotten of what could be this year's breakout comic gem.

And what an eye-opening look it is.

Warner Bros. released both a regular trailer and a red band explicit trailer with about 15 seconds of additional footage. The trailers are pretty similar, but there's at least one scene in the red band trailer that will leave a lasting impression.

The bottom line is that if you were worried about Warner Bros. neutering the film to get a PG-13 rating, I think it's safe to say that you no longer have to worry about that. It seems that Warner Bros. has gotten smart and learned from their success with The Hangover series of films that you can make money on a hard R, adult comedy.

Let me just take a moment and give proper appreciate for Jennifer Aniston's body. She plays a stripper and erases any doubt in the five second clip from the trailers that she can't pull it off. This is the second time that she's teamed up with Jason Sudeikis and it looks like their chemistry is just getting started.

It's refreshing to see Emma Roberts a bit against her type as a rebellious punk and those wondering what ever happened to the kid from Son of Rambow, he's branching out into comedies. We're the Millers hits theaters on August 9.