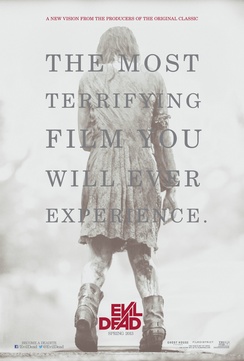 Everything old is new again at the box office and the studios couldn't be happier. While I don't have anything against Evil Dead per se, it's the concept of remakes and along with the re-release of Jurassic Park 3D that is slowly killing creativity in Hollywood.

I could expound upon this (and probably will in a future story), but suffice to say Hollywood isn't any different than any other company in the world. They give their audience what they want and don't stray too far from the established mold.

The problem with this model obviously is that the cyclical nature of it means that at some point, we will run out of films to remake or retool in 3D. Meanwhile, we won't have any new films to remake.

And so, here we are with two films from the past clogging up two spots in the top five of the box office and it looks like we'll only get more in the future. The good news is that box office is performing well heading into the Summer months, but at what cost?

Despite having the blessing and producer credit of both Sam Raimi and Bruce Campbell, there's just something that feels wrong about remaking Evil Dead. Don't get me wrong, Evil Dead is just the latest in a long line of classic 1980s horror remakes, so I really shouldn't be surprised, and yet I am.

More than Friday the 13th or A Nightmare on Elm Street, there's something almost sacred about The Evil Dead, but that didn't stop them from disturbing the film's grave. The second coming of Evil Dead was a big box office success taking home $26.0 million in its initial weekend, besting the total box office take of the original by almost $24 million.

While at least they made the film with practical effects, I think all of those promises will be out the window in the assured sequel. Evil Dead is on target to bring in a nice and tidy $50 million when it's all said and done.

This week, we get both barrels of Hollywood's regurgitation machine with the aforementioned remake and the re-release of Jurassic Park in 3D. And the sad thing is that they were both pretty big successes. Jurassic Park 3D brought in $18.2 million to add to its coffers.

Jurassic Park took in $357 million during its initial theatrical run, so at least there's no chance the 3D re-release will match that, but it should add another $50 million or so. This will bring Jurassic Park's total gross over $400 million.

This is an interesting trailer for the remake of Carrie. While Tim and I usually see eye-to-eye on many things, he's pretty boffo on this remake as he thought the original Carrie was a bit "jokey."

It's hard to properly evaluate films from the late 1970s and early 1980s because a lot of the camp that was a regular part of all films back then loses some of its shine and comes off a bit phoney. What I do know is that Carrie really introduced me to horror films and to Stephen King in particular so it will always hold a high regard for me.

Interestingly, I think the original film and the remake put their emphasis on different aspects. With the hot young cast of Sissy Spacek, William Katt, Nancy Allen and John Travolta you can see why that film spent so much time focused on Carrie's high school taunting.

By contrast, at least by the looks of this trailer, the remake will rely heavily on Julianne Moore's acting chops as Carrie's mother and the abuse she imparts on Carrie at home. Naturally, there will be plenty of school bullying too, but I think they'll trade out the hokey special effects for some kick ass modern day stuff.

Tim makes a good point, with all of the bullying in schools these days, it's a great time to remake Carrie and point out the harm in bullying. There's also some weight to the argument that technology can finally do justice to Carrie's power.

Either way, I still hold a dear spot in my heart for Brian De Palma's original film and it will be hard for the remake to live up to its high standard in my eye. Take a look at the trailer below and let us know what you think.

For comparison's sake, here's the trailer for the original Carrie. Carrie hits theaters just in time for Halloween on October 18.

I really never thought I would have to say the words, Grown Ups 2, but I guess I was wrong. This may be the one sequel that I despise more than any other film this year.

And yet, it seems that I'm in the minority with this opinion and that's OK. I get it. People want Adam Sandler back. You know, the funny guy that made us laugh our butts off over a decade ago, but let's face it that guy no longer exists and we should lower our expectations.

So, this movie exists and they released a trailer for it. You can watch it below and tell me below how I'm wrong, but I'm sorry, I didn't laugh once at this trailer. Grown Ups 2 is due out on July 12, 2013.

Well, I'm going to end the MMM right there today. I was totally set to add at least one more story, but then my machine completely froze on me. I'll take it as a sign that I didn't lose any of the information above and leave it at that.

Until next week, mix well!