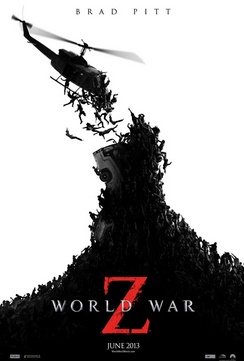 Just when you thought you were safe to fly the friendly skies without having to worry about Snakes or any number of predators attacking you, the latest trailer from World War Z goes where no zombie film has ever gone (at least to my knowledge), zombies on a plane.

I know that sounds terrible and almost like I'm ripping on the film or the trailer, but the truth of the matter is that I actually thought today's trailer kicked some major tail and provided much needed direction in terms of story. You might recall when I saw the original trailer last November I blasted it for being pretty much glorified eye candy without much in terms of plot development.

Today's offering does a pretty admirable job of filling in some plot points that make me want to see where the film goes. Once you get past all of the Brad Pitt "I will not leave my family behind, OK I guess I have to in order to save humanity" stuff, it looks as though there's a pretty interesting action/thriller story to be had.

While most zombie films tend to get bogged down with the actual encounters and fighting with the zombies, it appears that World War Z will focus more upon our official response to the zombie threat and how we can save humanity. I haven't read the book, but I'm will to bet that Brad Pitt's character and his family survive pretty much unscathed.

I mean, you have to start a sequel somewhere, no? World War Z hits theaters on June 21. Oh, they also dropped a nice new poster that you can see over on the right and above.