'Pain'ful to say: The trailer for Michael Bay's next movie looks really good 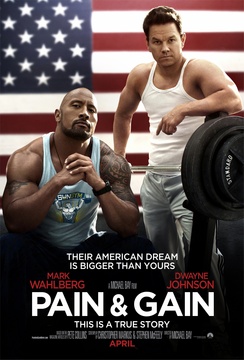 Director Michael Bay is the man all serious movie fans love to hate. Fanboys hate the treatment he gave their beloved Transformers franchise. Film critics say he's lazy and exemplifies all that is wrong with Hollywood's commercialism. Even as a producer, his company's practice of remaking horror classics like Friday the 13th and A Nightmare on Elm Street has met with considerable resistance.

Regardless, his films certainly do make money. A lot of money. Each Transformers movie grossed over $300 million at the domestic box office, over twice their production budget. Combined with overseas markets, the three movies made a staggering $2.7 billion in total.

I'm hear to say he's not all bad. In essence, his films' profits help pay for studios' more risky efforts. Had Paramount not made Optimus Prime-sized money on Transformers, they may not have produced No Country for Old Men or There Will Be Blood. Michael Bay may deserve his criticism but he's indirectly writing the checks for modern award winners.

And if the trailer ofr his latest is any indication, Bay is still capable of making a good movie. (The Rock was pretty good, right?) Yahoo! Movies has the first trailer for his upcoming film Pain & Gain. The action-comedy stars Mark Wahlberg and Dwayne 'The Rock' Johnson in the true story of bodybuilders who kidnap a crooked businessman to make a quick buck. Check out the video below.

I initially cringed at the combination of Bay and my least favorite actor Mark Wahlberg. Here Wahlberg seems to have finally found the role he was born to play. Johnson's character is a bit atypical for him. Yeah, he's ripped but the less charismatic character seems like a good departure from the norm.

The third in the testosterone triumvirate is Anthony Mackie. He's really an underestimated actor. I think audiences will get a better understanding of his talents with the upcoming Gangster Squad.

Against the would-be criminals are Tony Shalhoub and Ed Harris. They're proven stars with the goods to make for outstanding antagonists. On the other hand, the feel of the Miami-based film does smack of Bad Boys. Perhaps that's the Michael Bay laziness everyone talks about.

In all, I'm really look forward to this film when it hits theaters on April 26. It should be Michael Bay's best chance to prove the haters wrong.