My current odds on favorite to direct 'Star Wars: Episode VII' is... 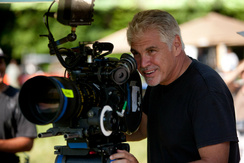 I can hear you groan from here, "Oh no, not more Star Wars news." Yes, it's more Star Wars news and a whole lot of conjecture. You have to admit that the Disney/LucasFilm news is one of the (if not the) biggest news item to come down Hollywood in the last decade or so.

So, we owe it ourselves, and you, to give Episode VII a proper introduction to the world. That and we're really big Star Wars geeks around here, so please bear with us as we get our geek on.

With all of that being said, allow me to get the news out of the way first so that we can get to the juicy conjecture part of this story. LucasFilm dropped the second part of the George Lucas/Kathleen Kennedy interview on the official site.

If you missed part one, you can watch it over here.

You'll notice that the new video seems to hammer home the idea that Lucas will not be involved in the day-to-day development of the films, but will be used as a sort of living Star Wars Wikipedia for the filmmakers.

The more interesting little piece to me was when Kathleen Kennedy started talking about who they would like to bring in to sit in the director's chair. While she didn't come right out and name names as it were, she did give us a pretty good idea what to look for when handicapping the field of potential Episode VII directors.

They must be big fans of Star Wars (that's a given) and have a real "appreciation of what Star Wars meant to them." OK, well, it's good that they aren't going to out to get someone who's never seen the films to direct the new one.

The more intriguing part was when Kathleen slipped (?) and mentioned about the possibility of bringing people that she's worked with in the past into the Star Wars universe. Now, that's a juicy bit of information.

It only takes a simple IMDb search to narrow down the list of suspects. Kathleen has produced 80 films, so the list is still a large one, but a few (and one in particular) names start to rise to the top.

The most obvious director that she's worked with numerous times that has never directed a Star Wars film, despite his close friendship with Lucas, is Steven Spielberg. Before you start drooling, you should know that Spielberg is crazy busy and he's already denied having any interest in directing Episode VII.

For the record, that story from First Showing also shoots down Quentin Tarantino and Zack Snyder as possible candidates. But interestingly, it does claim that a source has told them that Christopher Nolan has been approached.

While I would get in line right now for Episode VII if Nolan were directing, he has never worked with Kathy Kennedy and still remains a long (but much desired) shot for me.

Back to those people who have worked with Kathy Kennedy in the past, another name jumps out, although some of you might want to sit down. Kathy produced The Sixth Sense, Signs and The Last Airbender which were all directed by none other than M. Night Shyamalan.

While M. Night does have some good history with Disney during the better years of his career, I don't think they would really be comfortable putting the future of their new franchise in his hands. That and I think the collective fan base would gasp and bring the Internet to its knees with vitriol and hate if he were announced as director.

Also, M. Night already has a big space film opening up next year called After Earth. I just don't see it happening and I'm going to go ahead and call this one dead on arrival, you know, sort of like most of M. Night's last few films.

One potentially intriguing possibility is the director she worked with on The Curious Case of Benjamin Button. David Fincher also has some LucasFilm experience in his distant past when he worked for Industrial Light & Magic during the Indiana Jones and the Temple of Doom days.

Fincher would be a great choice. His unique visual style will bring the dark aspects back into the franchise that were notoriously absent in the prequel trilogy. Also, for a hot director, his schedule is suspiciously empty for the foreseeable future.

I think he remains a true dark horse candidate, but I think Disney would have some qualms about bringing him into the Mouse house.

The horse I'm betting on

We could play this game all day long and come up with some interesting candidates, but I think one name sticks out more than the others to me for some reason. That director is none other than Gary Ross, the man behind The Hunger Games.

He and Kathleen Kennedy worked on Seabiscuit together and the only other film that he directed was Pleasantville. So yeah, while he does have a short resumÃ©, I think that having The Hunger Games on it is a huge bargaining chip.

Now, here is where things get a bit interesting, or a bit more conspiratorial you might say. The Hunger Games came out in March of this past year and was the runaway hit of the early Summer box office. You could say that Gary Ross was the flavor of the month if you will.

Amid all of the accolades and financial success, Gary made a move that didn't make any sense to me at the time. He made the decision not to direct the sequel to The Hunger Games, Catching Fire.

The move shocked his cast and many thought at the time that it was simply a ploy by Gary to demand more money. He gave insufficient time to properly develop and film the sequel as his official reason for leaving the project and for someone with only three films on his directorial resumÃ©, it sounds just as bad now as it did then.

In August, news broke that Gary was set to direct the Peter Pan prequel 'Peter and the Starcatchers' for Disney. Yeah, that move sounds about as flimsy now as it did then too.

Who turns their back on a budding franchise to do a little film for Disney that sounds potentially like an artistic flop waiting to happen. If there's one thing I will say about Gary Ross, he doesn't have a bad film on his resumÃ© and I would be surprised if he would start adding them now.

However, in light of the past week's events, I'm beginning to see an alternate timeline of events.

After The Hunger Games debuted to critical and box office success, LucasFilm and Disney took notice. Kathleen Kennedy remembered Gary from their Seabiscuit days and reached out to him to gauge his interest in helming a new Star Wars film.

Like any good Star Wars geek worth his weight, Gary immediately cleared his schedule (pulled out of Catching Fire) and Disney came up with a legitimate sounding excuse for him to be hanging around the lot (directing 'Peter and the Starcatchers'). Sure, this sounds a lot like more conspiracy theory conjecture, but it's Star Wars.

So, is Gary Ross a Star Wars fan? While it's pretty much a given that he, like pretty much everyone else in Hollywood, has an appreciation for Star Wars, I decided to do a bit of digging.

The Huffington Post wrote an article back in May of this year to celebrate the 35th anniversary of the release of Star Wars and wouldn't you know that they asked Gary Ross what the film meant to him. Naturally, he had a very compelling answer.

It's hard for me to think back on "Star Wars" without remembering the wonderful Joseph Campbell/Bill Moyers series that Lucas also produced. Campbell was a huge influence on Lucas, and like all great science fiction, 'Star Wars' cares as much about eternal things (like familial relationships and the discovery of identity) as it does visual effects. It's such a great lesson to us all. Lucas also lets us empathize with frailty: the vulnerability of R2D2, the beat-up wreck of a space ship that Han Solo flies, the huge beast of Chewbacca that can only wail plaintively, but somehow we always understand him. Lucas was interested in real heroes, and we've all been the beneficiary.

You can read the entire piece here (and I strongly recommend that you do), but Gary's response seems to jump out from all of the rest. He definitely went deeper in his reply and put thought into it, almost as if he knew at that time what laid ahead for the franchise.

But wait, you say, maybe Gary Ross is truly working on this Peter Pan prequel. Sure, it's possible, but if he is then he's really doing it on the down low.

He recently released a children's book ("Bartholomew Biddle and the Very Big Wind") and EW caught up with the director who explained his reasons for turning down Catching Fire.

One last quote stuck with me.

I havenât had a momentâs regret. It was absolutely the right decision and Iâm thrilled about new challenges.

Perhaps those new challenges lie in a galaxy far, far away.