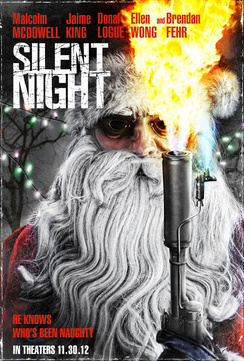 Santa is back and instead of reindeer and presents, he's got a flame-thrower. If this sounds a bit troubling to you then I take it you weren't a big fan of the Silent Night, Deadly Night series of films from the mid-1980s.

Given that I was on the cusp of my teens and really into horror films, these films were high on my must-see list each year. There was just something interesting about taking the horror out of Halloween and putting it into something that is traditionally more family-centric like Christmas.

Years later, Tim Burton would do the exact same thing with The Nightmare Before Christmas, albeit with less blood and a much smaller body count.

As it is en vogue currently to remake these slaughter pics from my youth, I figured it was only a matter of time until Hollywood got around to Silent Night, Deadly Night series. As you can see from the trailer below, the films were as low budget horror as you could get and while the effect works in the classics such as Friday the 13th and The Texas Chainsaw Massacre, in this series it comes off as cheap and chintzy.

The idea is great and while this appears to be less a remake and more a continuation of the urban legend that is the killer Santa, there is still more than a few nods to the original series of films. There is a certain inherent danger in taking something as innocent as a clown or Santa Claus and making them violent.

It really turns human expectation on its ear and allows you to play into the primal fear in all of us. Is Silent Night going to be a good film? Who knows, but it's the right amount of slasher exploitation to help get the horror junkie into the new year.

Another thing that I like is the release strategy. Anchor Bay is releasing it in a few theaters at the end of the month and then the DVD and Blu-ray comes home on December 4, the following Tuesday.

Instead of waiting a whole year to take advantage of the holiday season like many Christmas films do or dropping it in the middle of no man's land in March or April, they are using the theatrical release as a bit of "free" publicity for the home entertainment release.

Will it work? Time will tell, but one thing is for sure, this Christmas Santa has a whole new bag of toys.