Monday Morning Mixer: The fourth time's not the charm for 'Paranormal Activity' 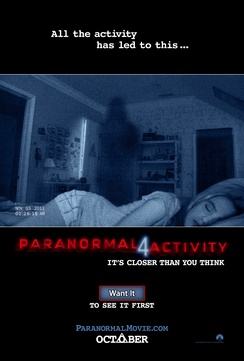 What a weekend! I think it's safe to say that the doldrums of Autumn have departed and things are heating up (or cooling down technically) in Hollywood.

The end of the October is also a time when the box office usually heats up as people flock to the megaplexes to get their scare on. Whether it's Saw or Paranormal Activity, Halloween (rightfully so) has been the fertile breeding ground for things that go bump in the night.

This weekend, it was Paranormal Activity 4 and things were a bit rocky, but don't let that fool you. The scares and screams were out and about all over Hollywood and the world for that matter as we had a bit celebrity wedding and an F bomb heard around the world.

For now, let's start where we always do with the box office report and we will see where the morning takes us. Grab your coffee and dig into the MMM.

Paranormal Activity 4 won the weekend and normally its $30 million would be trumpeted, especially against almost no-existent production costs. But, when its predecessor opened with north of $52 million, the 42% drop off from last year is hard to ignore.

Of course, the less-than-expected performance did very little to deter Paramount from announcing that Paranormal Activity 5 will be making its way into theater in October 2013. Paramount is also readying a Latino spinoff that will shop up in megaplexes this coming Spring.

With minimal production costs, this really shouldn't be surprising news for the Paranormal Activity, but if this weekend is any indication, America might just be pushing back at its mindless plot. One can hope, right?

Don't worry though, there will always be a horror franchise waiting in the wings to step into the void as it were and force us to eventually hate it too.

In second place, Argo almost held its ground completely which is very good news for the Oscar-caliber film. It was off only about 15% from last week with $16.6 million in its second frame. Argo has now taken in almost the same amount as its $44 million budget.

Considering that Warner Bros. was tracking it internally to take in only $60 million, I think it's a safe bet that Argo is surpassing expectations. After Gone Baby Gone, The Town and now Argo, Ben Affleck has proven to be quite proficient in the director's chair.

I think it's a bit of a stretch for Argo to catch The Town's $92 million box office number, but I don't think it's beyond the realm of possibility to see Argo end up right around $80 million.

Taken 2 slid from the top spot all the way to fourth with $13.4 million, but the real loser on the weekend was Alex Cross. The film based on the popular James Patterson character failed to live up to expectations and some are pointing to lead actor Tyler Perry.

While I will say that it takes some huge cojones to step into the shoes of a character that Morgan Freeman absolutely owned, it's not like Tyler Perry hasn't already made Lionsgate (which now owns Summit) a boatload of cash. However, I'm pretty sure that not even retitling it Tyler Perry's Alex Cross & Madea could save this film.

Don't kill the messenger, it was either that or "Guess Who's Reached '7th Heaven'?"

In case you can't figure it out from the two mentions above (and if you can't consider yourself very lucky and share the secret with the rest of us), triple-threat Justin Timberlake added another hyphen to his name, as in Justin Timberlake-Biel. The singer/dancer/actor proved that the pair were more than Friends with Benefits when he went into Stealth mode and tied the knot with actress Jessica Biel in Italy over the weekend.

Hopefully this is more than a Summer Catch and they don't have to visit a Love Guru or Jessica doesn't have any Trouble with the Curve. Thankfully, I hear they are Playing for Keeps and it will last at least until New Year's Eve or Valentine's Day.

I guess they are Hollywood's new A-Team, but we still need to help out The Social Network and give them their celebrity name. I'm partial to TimberBiel, but I suppose Bielberlake would work too, as long as you don't forget to Pronounce the "l," because if you don't, well that's a story that even The Illusionist can't help you with.

I hate myself. I think it's time for a Total Recall on this whole section.

Long before Tom Hanks was America's every day Joe, the lovable sweetheart that came to epitomize goodness and wholesome American values, he was Tom F'ing Hanks. In Bachelor Party alone there were several risquÃ© Tom Hanks moments and that was before they brought out the donkey show.

But, somewhere along the line (Big), Tom went from edgy and upcoming and became safe. Don't get me wrong, he still took edgy roles and won a couple of Oscars along the way, but he was again the "bad boy."

Last Friday on Good Morning America, Tom was doing a bit in an accent and accidentally drop an F bomb on live TV.

He was immediately apologetic and his host looked to be in shock and the actor even turned to Twitter a bit later to apologize again.

For GMA, spesh kowtow for Lizzie V for WHAT DID I JUST SAY??? Oops!In character!Sorry!Hanx

But, it's not like Tom can't pull off the sailor talk. Heck, he even rattled off a few cuss words in everyone's family favorite hit A League of their Own.

Hanks also turned up this weekend on Saturday Night Live in a couple of bits, but that turn on live TV was far more tame. Hanks is making the rounds for his latest film Cloud Atlas which opens up at theaters on October 26.

My cohort Tim wants to start calling teaser trailers "semi trailers," but what do we call the teases of teaser trailers? If you are a die-hard Iron Man fan, there's great news this morning.

Over the weekend, Marvel released a 17 second tease of their teaser trailer which will drop tomorrow on iTunes. Yes, the footage is new, but they could have used 17 seconds of footage from The Avengers or either of the previous Iron Man films and I would be none the wiser.

Anyhow, I suppose there is a bit of stuff to report from these measly 17 seconds of footage. There's a shot of Gwyneth Paltrow's Pepper Potts being held prisoner and expressing pain, so there's an indication that her role will be beefed up in this outing.

There's also a shot of a villain (?) from behind with the worst ponytail that I've ever seen. I have so little knowledge on this sequel though that I can't even begin to speculate who it is. I'm sure one of our readers can enlighten me though.

Anyhow, enjoy the "semi trailer tease" and I'm sure we'll have the full teaser up on the site tomorrow.

I will leave you today with this very cool piece put together by Press Play on Quentin Tarantino's Pulp Fiction. Apparently, they are in the middle of a video essay on Mr. Tarantino and this installment looks at the cool factor of his characters in Pulp Fiction.

As you know by now, I love anything from Tarantino, so it's always refreshing to ruminate on one of his iconic works. I think you'll find it enjoyable at the least and perhaps even a bit enlightening.

Until next week, stay cool and mix well!