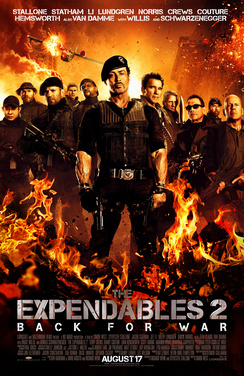 It's funny, this morning my daughter did not want to wake up. It's like at 9 months old, she already knew what it felt like to have a case of "the Mondays."

Of course, she gets numerous naps throughout the day to help ease the pain. What do we get? Caffeine. Lots and lots of glorious caffeine.

Usually, we are able to ease into our work week and take it slow on Monday mornings, but not today. It was an eventful weekend all around, both good and sad.

It's time to grab your cup of Joe and read all about the weekend that was.

Sly Stallone and his action buds got the band back together for the next installment in The Expendables franchise. The Expendables 2 earned slightly less than its predecessor making $28.8 million in its opening weekend.

The general rule of thumb is that sequels should make more money than their original films. The idea being that only successful movies get sequels and that not only do you have the original audience wanting to see the next film in theaters, but also all of those who discovered the film on home entertainment.

Usually, the reason that sequels have to earn more money to keep the franchise alive is that the budgets go up with each successive film. Everything needs to be bigger and better in the second movie, especially with action sequels.

Will The Expendables 2 still be profitable? Assuredly, but with this type of performance, you have to wonder if "The Expendables 3" which was a foregone conclusion last week will come under more scrutiny now. Also, you have to question whether the audience will still be craving geriatric action heroes in a couple of years.

ParaNorman opened up with $14 million which is just off the opening of Coraline, but it should do a modest $65-70 million when it's all said and done. That seems a bit low when you look and see all of the work that they put into creating each and every frame.

The other new film that opened wide this week was Sparkle, the Jordin Sparks debut film. While it only opened up to $12 million, Sparkle will forever be known as Whitney Houston's last film.

While Whitney starred in a slew of films in the '90s, including the critical success The Bodyguard, she hadn't starred in anything since 1997's Rodgers & Hammerstein's Cinderella. Sparkle was supposed to represent her return to film before her untimely death earlier this year.

In other notable news, The Dark Knight Rises surpassed the $400 million mark and became the third film released this year to do so. The next couple of weeks don't offer much in the way of competition, so it will be interesting to see if 2012 can outpace 2011 through Labor Day. It started with such promise, but now has fallen a bit behind with a few weeks left.

This piece of news was slap to the face this morning. Director Tony Scott died yesterday in Los Angeles when he climbed a fence on the Vincent Thomas Bridge and leapt to his death.

Tony and his brother Ridley Scott were producing partners in "Scott Free Productions" and had each directed some of Hollywood's most iconic films in the last 30 years. Tony was probably best known for directing Top Gun, but I will always remember his as directing one of my top five films of all time, True Romance.

Details are still a bit hazy at this point, but it seems that he did leave a suicide note as well as a list of contacts in his car. Tony was 68.

If there's one topic that I thought had been exhausted in film, that would be the JFK assassination. But, apparently I'm wrong.

According to Variety by way of Film School Rejects (because Variety has a silly pay gate), Tom Hanks is producing Parkland, a film that will recount JFK's famous last day from multiple accounts. From the gist of it, the film won't harp upon the conspiracy angles that Oliver Stone did with JFK, but rather focus on the people who became famous and infamous on that fateful day.

No word yet on when the film will go into production, but given that it's being touted as a massive ensemble piece, it most likely won't begin filming until next year at the earliest.

More Shia in the buff

What is it about the MMM and Shia LaBeouf in the buff? You might recall that we've previously talked about him (and his manhood) starring naked in a music video earlier this Summer, but now MTV has an interview where he promises to go a bit further

According to the interview, Shia implies that director Lars von Trier is planning to film "everything" for his next films The Nymphomaniac and The Nymphomaniac Part 2. The companion pieces follow the sexual arousal of a woman from her youth to age 50.

This is certainly not shocking news when it comes to Lars von Trier as he's always pushed the envelope as a filmmaker, but it is rather odd to hear Shia again take a shocking role in the face of what was a successful big screen career. I'm all for actors making controversial choices naturally and Shia is certainly free to show his wanker wherever and whenever he pleases (well within the limits of the law naturally), but it's like he's trying too hard to tarnish his tent-pole name. No pun intended.

Only a few short years from starring in such box office behemoths as the Transformers movies and Indiana Jones and the Kingdom of the Crystal Skull, it's like he's purposely ensuring that he'll never be cast in a big studio film ever again. Hey, to each their own, I'm sure Hollywood won't have a problem finding their next Shia LaBeouf.

You can watch the video below:

And on that note, I'm going to leave you before you lose your lunch thinking of the LaBeouf in the buff. Until next week, mix well.