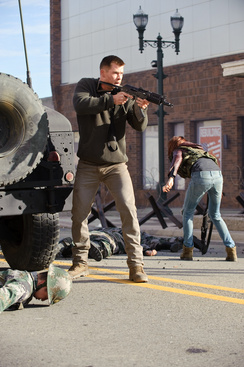 I was 10 years old when Red Dawn came out. Of course, my parents saw a young cast kicking Russian butt and figured it was appropriate for my impressionable eyes.

Now you're beginning to see how I became who I am today.

I'll be honest, I was attracted to the movie initially because of the "Wolverines" yell in the trailer. Growing up outside of Detroit, I was (still am to a certain degree) a University of Michigan fan, so I was convinced that they were talking about the team from Ann Arbor.

Now, the film is rated PG-13, so it wasn't too far beyond my "age appropriateness," but when I think back on it, I'm a bit surprised that I wasn't more traumatized with all the kids getting shot up. The one scene in particular that sticks in my head all these year's later is when Jennifer Grey's character knows that she's dying, but keeps a live grenade on her so that she can take some of the enemy with her when she perishes.

With over 25 years of time passing between when I first saw it and today, I'm surprised that it didn't cause more nightmares than it did. I mean, you have Daryl's cold-blooded execution at the hands of the kids themselves when he's discovered to be a (coerced) traitor.

While sure, the epilogue does give the film a sense of hope and purpose in all of the bloodshed, you never get that denouement on the big screen itself. A lot has changed in film and it certainly shows in the trailer for the new Red Dawn. First and foremost, I really doubt that you're going to be able to show Daryl's execution, but I'm sure they'll figure out a way to work it in without compromising the morals of the kids.

But see, that's the problem. The reason that Red Dawn works is because it forces young kids into situations that they aren't truly equipped to handle. In essence, they become adults before they are ready and the beauty of the original film was the way in which Patrick Swayze and Charlie Sheen's characters are able to cope and thrive under the conditions.

The original Red Dawn certainly doesn't have a happy ending, but the trailer for the remake almost makes it seem like they will all get one. A few things have changed, such as North Koreans standing in for the original Soviet soldiers, but for Red Dawn to work, I think they need to stick to the spirit of the original.

In other words, there has to be a pretty significant body count. I don't think modern Hollywood will allow it, certainly not in the way of the original, but I am a bit hopeful based on a few things that I did see in the new trailer.

First, I did enjoy the homages to the original film. In particular the scene of the Wolverines popping up from their hiding places to slaughter the soldiers that were lured away from the group is nice. The field is replaced by a gritty urban alley, but it works.

I also really like seeing Chris Hemsworth stepping into Swayze's shoes. Thor does Red Dawn. What's next? Thor does Ghost? Thor kicking ass as a full-time bouncer and part-time sex against a pole enthusiast in Road House? Let me guess, Thor goes Dirty Dancing. Nobody puts Loki in the corner...

Looking at the posters for the two films, I'm not shocked in the least that there's no real homage to the original film. The 1984 poster, as seen below, is a bit more surreal and really doesn't even hint at the violence that is to come. 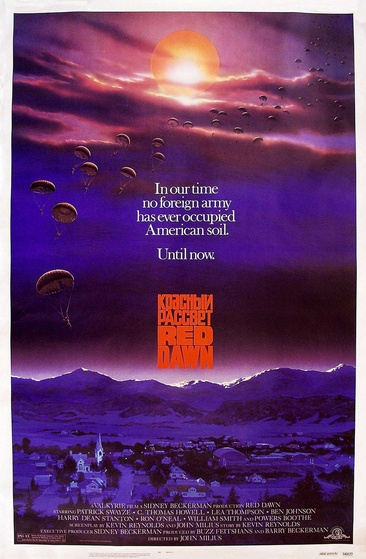 There's no cast whatsoever on the original poster. Now, the remake is all about capitalizing on the fame that its cast has accomplished since making this film in 2009. And really do you blame them? Since wrapping the shoot, Hemsworth has become a huge superhero from another world while Josh Hutcherson has become the world's most famous baker thanks to The Hunger Games.

So, those two are front and center and there's plenty of guns on the poster. 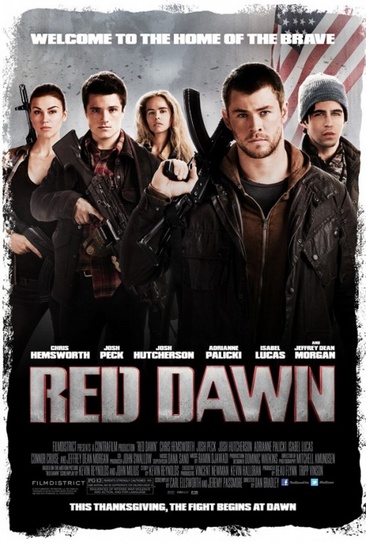 As for the trailers themselves, I think you can certainly tell that even though the original holds up quite well, the huge advancements made in special effects and CGI only help the new film. There's plenty of explosions to be seen and they are certainly more spectacular than they were in 1984.

One thing that I suppose I can live with is that it appears that the new film will be based more on urban warfare, while the original film played up its middle of the country rural feel. The urban setting certainly makes the film more gritty and it allows the film to create its own identity. 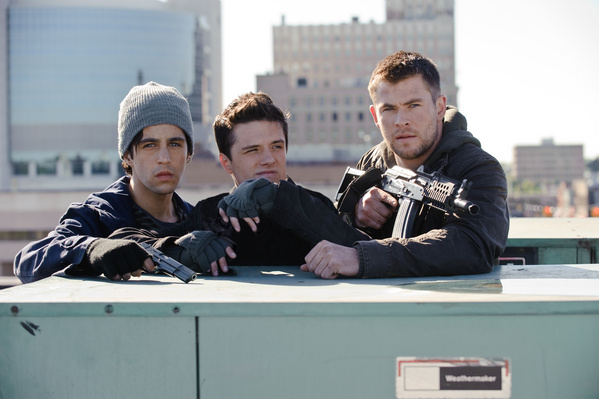 Finally, one thing that irks me about the remake is that North Korea basically is able to invade the Pacific Northwest with nothing more than a glorified electromagnetic pulse (EMP) weapon. I mean come on, EMP has been around forever now, I'm pretty sure the powers that be in the United States has developed a strategy in the case something like this were to happen in real life.

If they haven't, they might want to start putting one together. Here's the original trailer in all of its mid-1980s glory.

And here's the trailer for the remake, set for release on November 21. To pull it all back together, the remake was filmed mostly in the greater Detroit area, so at least there will be the potential for some real Wolverines to pop up on screen.