I hate to admit it, but 'The Dictator' trailer is hilarious 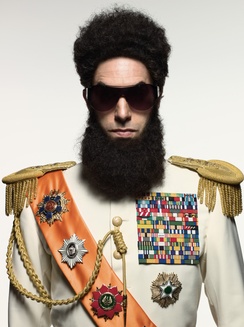 Tim has been a staunch supporter of all things Sacha Baron Cohen and I have been more cold to the actor. Frigid is probably a better word to describe it.

So, I had a big prejudice when I watched the teaser trailer for The Dictator a few months ago and naturally I bashed it. So, imagine my surprise when the full-length trailer hit this week and I found myself laughing, a lot.

I know, it shocked me too.

The problem with the marketing materials up until this point was that they solely focused on the stereotypical, maniacal dictator that Cohen plays in the movie. Naturally, I just assumed that the entire movie would be one big ego joke, I couldn't have been more wrong.

From the trailer below, The Dictator looks more like it comes from the Coming to America mold than Cohen's previous works. Sure, his character is still a schmuck even without his beard, but there looks to be some room for growth that should make it a more rounded, and therefore more accessible film.

Watch the trailer below and let us know what you think. The Dictator hits theaters on May 11.