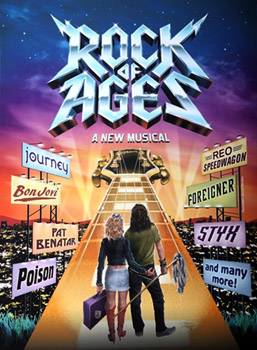 There's been a real resurgence lately of the movie musical and if you were to tell me that there's a movie musical on its way set amid the music scene in L.A. in the mid-1980s, I would be pretty excited. Well, guess what?

Rock of Ages is exactly that movie. It's a big screen adaptation of the Broadway musical in which a small town boy and girl meet up in L.A. to make their dreams come true and find love along the way.

Well, throw in Alec Baldwin, Paul Giamatti and Russell Brand and I'm there. However, there is one huge red flag that is leaving me unsure.

And his name is Tom Cruise. Cruise is playing lead rock star Stacee Jaxx and while the rock star persona fits with his latest turns, I'm a bit skeptical of him playing a rock star at his age.

I guess what I'm trying to say is that the jury is still out for me, even after watching the trailer. However, I am only one person. Watch the trailer below and you be the judge. If you like big hair and '80s rock and roll, I'm thinking you will be a fan.

Rock of Ages will attempt to win audiences in the crowded 2012 Summer slate on June 1.