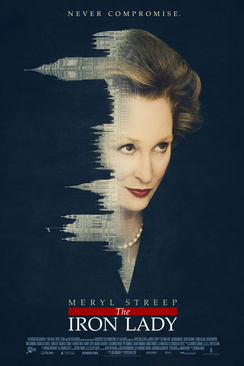 I'll be frank. I'm a film buff and occasional film blogger/critic, so the last thing that I'm qualified to offer an opinion on is politics.

That, and Tim and I have a strict rule of not talking politics on the site. So, I'll leave all of the conjecture about the subject matter surrounding the Margaret Thatcher film The Iron Lady to the talking heads on TV. What I will comment on are the award implications of Meryl Streep's performance.

All I really know about Margaret Thatcher's tenure as the Prime Minister of Great Britain is that it was important to her country and international politics as a whole. She was a powerful woman and strong symbol of a country that we really only covered in history books growing up as having really unfair taxation on tea and losing the Revolutionary War.

I know far more about Meryl Streep. For instance, I know that she's been nominated for 16 Academy Awards, but has only won two of those golden statuettes. Surprisingly, she hasn't won an Oscar since 1982, for Sophie's Choice.

But I'm here to tell you that from this trailer, the Oscar is hers to lose. The Academy really loves strong portrayals of British royalty. See Colin Firth last year in The King's Speech. And true, Margaret Thatcher isn't technically royalty, but there's a pretty good chance that most of the Academy won't know the difference.

I can tell you with certainty that her name has already been etched into the BAFTA Award for Best Leading Actress. Again, I'm not accusing the Brits of showing favoritism, but The King's Speech did take home 7 BAFTA Awards last year.

At this point, I'd say an Oscar nomination for Streep is a stone-cold lock and I would consider it a pretty big upset if she didn't bring home the statuette. Watch the trailer below and let us know what you think?