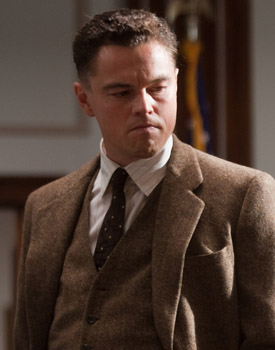 Earlier this month, Tim kicked off our discussion of Oscar hopefuls with an extra early look at some potential contenders for the golden little man. Now, we continue to augment our predictions with this new series of trailers of films that we think will compete come awards season.

We begin today with the first trailer from the upcoming Leonardo DiCaprio film J. Edgar. Leo has been a staple at awards shows lately racking up three Oscar nominations, but this might be the year that he finally breaks through and wins the statuette for his portrayal of the iconic titular character.

J. Edgar is a virtual lock for one of the Best Picture noms (regardless of what that number may be). As he did previously with Unforgiven and Million Dollar Baby, Clint Eastwood might just snag both the Best Director and Best Picture Oscars.

On the supporting front, I think it's a safe bet that both Armie Hammer and Dame Judi Dench will get nods. Armie plays Hoover's #2 man in the FBI Clyde Tolson. While it's still unsure how much of Hoover's personal life will feature into the movie and the rumors therein, the trailer certainly establishes that they will at least touch upon the rumored relationship between Hoover and Tolson.

After the acting awards, I'm sure that makeup and costuming will be singled out as period pieces always seemingly score well in these categories. When it's all said and done, it wouldn't surprise me if J. Edgar leads all movies in terms of nominations and walks away with the most Oscars.

J. Edgar debuts in theaters on November 9, 2011. For now, enjoy the trailer below and let us know what you think.