Kevin Smith's 'Too Fat for 40' hitting DVD in November 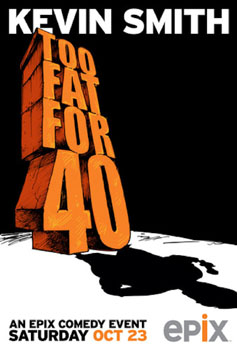 For someone who is allegedly "retiring" (from making films), Kevin Smith is seemingly busier than ever. His new daily Internet radio show Plus One Per Diem continues to be a fount of information this week when he announced today that two more of his projects will be releasing on DVD this November.

Shout Factory is working with Kevin to bring his Epix Q&A special Too Fat for 40 and SModimations: Season 1 to DVD in November. As I'm sure you are aware (and Kevin pointed out on his show) Shout Factory is the company responsible for the amazing collectible editions of Judd Apatow's TV projects Freaks and Geeks and Undeclared.

Too Fat for 40 was one of Kevin Smith's trademark Q&A sessions akin to his Evening with... series in which the filmmaker got up on stage and answered one question for two hours. Epix, a premium TV channel primarily found on the Dish Network, exclusively released the program on its network last year, but the DVD (naturally) promises plenty of bonus features.

Smith said that the DVD will include the complete 3 and a half hour answer to the single question asked as well as the traditional Q&A session that followed. In what has to be an industry first, Smith revealed that he would doing a solo commentary track to accompany the program.

Can you even imagine what that will be like? Will Kevin comment on his own answer or will he simply update the story? Personally, I'd love to see him sit down with a Southwest Airlines executive during the commentary and debate the virtues of true customer service. Either way, it will surely be a high point of the offering.

SModimations: Season 1, which will be available on the same date as Too Fat for 40, is a compilation of animated vignettes that Starktoons created to accompany the SModcast podcasts. Kevin did allude that there would be additional new content that wasn't previously available online.

Both offerings will be available in November and you can click here to be notified when we get the exact date from Shout Factory.