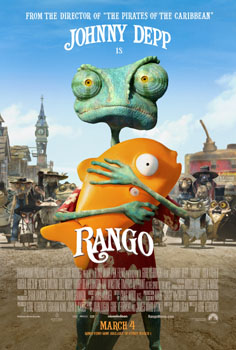 You know that the trailer season is heating up. No, not by the dropping temperature outside, but by the sheer number of new trailers that are finding their way online.

Just look at today's offering, a whopping four new trailers (and we chose these from even more hopefuls). Of course, more doesn't automatically mean better. No, I think you'll see that our snark is indeed still firmly in place as we present today's Trailer Roundup.

The real treat this week is, of course, the first trailer for Pirates of the Caribbean: On Stranger Tides and we decided that it was worthy of its own story. Tim, being the huge comic book guy that he is, also felt that Thor deserved its own trailer story too.

Hey, he's the comic book nerd, not me.

Without further ado, here they are. If Real Steel reminds you of the game you played as a kid called Rock 'Em Sock 'Em Robots, then you're not alone. This is basically that game come to life.

I guess the movie has something to do with boxing becoming too violent, so they turn to robots controlled by humans to do their dirty work. Yeah, and it doesn't even look that good.

Now, here's something more my speed, a good old-fahsioned mafia movie - with a twist. It seems that Danny is one Irishman that is tough to kill. I guess you can figure out where they came up with the title, Kill The Irishman.

There's plenty of explosions and guns that will insure plenty of butts in seats for this one. It even has the feel of a 1970s exploitation flick to boot.

Oh, how Anthony Hopkins has fallen. He used to be the man when it comes to movies and now he does stuff like this.

I don't want to prejudge The Rite too much, but when you're banking on exorcisms and "true stories" then it becomes a bit tacky. There does appear to be some spooky moments, but all in all, I'll pass.

And what's up with cats in exorcism movies? Really.

Johnny Depp as a lizard? Why not. The man can seemingly play anything or anyone. And while this has all the earmarks of a typical kids animated movie, I'm willing to bet that Depp will elevate it somehow.

Of course, this really just reminds me of An American Tail: Fievel Goes West. Yep, I admitted it. I enjoyed the Fievel movies. Go ahead, call me a wimp. I can take it.

Anyhow, Rango looks to be another in a long line of highly anticipated animated movies (say that five times fast) for next year. I'm betting that the Oscars next year for Best Animated Film will be a most competitive race indeed.