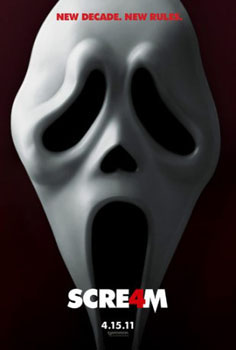 I admit it. I have a soft spot in my heart for the Scream movies. There was just something about the whole genre bending rules of the movies that I found exciting. I'm sure it had a lot to do with too many late nights watching horror movies as a kid.

But, sometimes too much of a good thing can be bad. And by the end of Scream 3, I was even ready for Ghostface to be put to his final resting place for good.

However, now that a whole decade has passed (has it really been that long?), I'm sort of excited again to re-visit Woodsboro and catch up on the surviving characters and be taunted by a new killer. So, it's no shock that I'd seek out the set of Scream 4 when I was home in Detroit over the Summer and even less surprising that I'd be excited over the teaser trailer release.

Well, that day has come and the trailer is here (well, below). In a word, I thought the trailer was perfect. It does a great job of recapturing the nostalgia of the first movie and going over some of the changes in the rules. I guess virgins are no longer safe. Uh-oh Sidney, I guess it's time to change the relationship from PG-13 to R.

The trailer was its best though at the end when I couldn't stop laughing. You'll know the part when you see it. I like that the original creative team is back and isn't too afraid to make fun of themselves.

So, what did you think? For comparison's sake, I've included the trailer for the original Scream below. I think you'll appreciate all of the direct nods in the new trailer. Scream 4 hits theaters April 15, 2011.