'The Expendables' preaches the truth to its target audience 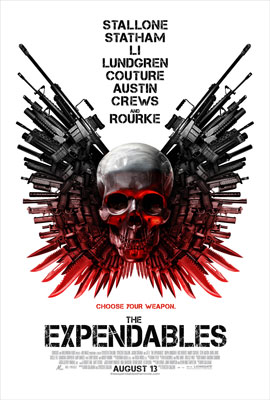 I will be honest, ever since I first heard about The Expendables my expectations for the movie were about as low as they come. At best I thought the idea of getting all of these (mostly) washed up action heroes together would be gimmicky, at worst it would be an abomination that would rival Battlefield Earth.

After seeing some footage at our sales conference earlier this year, my expectations went up a notch as it became abundantly clear that aside from having all this action talent, they actually had a pretty compelling plot that brings back shades of The Dirty Dozen. Sure, the gimmick's still there, but that's when I first started to think that I might want to actually watch this movie.

Once I saw the first trailer, I was convinced that I'd pay top dollar to see it in theaters. Now, thanks to Film School Rejects, I can share with you what might be the best piece of advertising for a movie in decades, if not forever.

With this much testosterone in the flick, it doesn't take a rocket scientist to figure out who their target demographic is and counter-programming it to release on the same weekend as the biggest chick flick of the year is genius. But, Lionsgate isn't simply satisfied with getting Eat Pray Love's crumbs. Oh no, they're going for the jugular.

As you can see in the trailer below, they want to win the weekend with the ultimate Roberts vs. Roberts showdown that will surely go down in the cinematic record books. After watching this clip, I feel more like a man, and I suppose that's the point they are trying to get across.

I must caution that certain women or frail men might find this video offensive and there's an adult word or two. Of course, there's also a great condemnation of those pirates who illegally watch bootleg copies of movies. Trust me, this is one that you want to experience in a state of the art movie theater.

What do you think of this advertising vehicle?