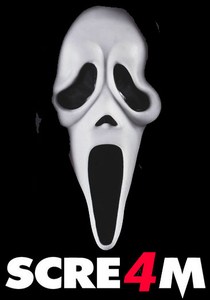 You've got to admit, the resemblance is uncanny.

Hey, you all remember that long gestating third sequel to Scream, don't you?

What a long, strange trip it's been for Scream 4. No really, it has. If you don't believe us, read up on our annual updates on it here and here.

One thing you might notice when reading those updates is the way cool pre-pre-pre-development poster that we created for the movie (right). It was so cool that it seems as though someone at Dimension Films made it a reality after looking at the official teaser poster (below) exclusively found on EW.com. 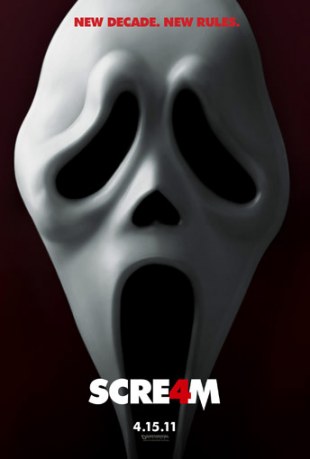 Well, it's not rocket science and it didn't take a genius (case in point) to figure out what existing elements to use to make an effective teaser poster. Personally, we'll just take it as a pat on the back for our ingenuity. Either that or we watch way too many movies.

To get you caught up in terms of news on the film, Scream 4 starts shooting in June and will be released on April 15, 2011. Neve Campbell, Courteney Cox-Arquette and David Arquette all return to reprise their roles from the original trilogy of films.

There was a rumor late last week that Jamie Kennedy would return to "reprise" his role as Randy despite dying in Scream 2. Of course, his untimely demise didn't prevent him from showing up in Scream 3 via a video recorded message. Given the tagline, "New Decade. New Rules." it would appear that someone new is going to have to elaborate on those new rules.

As for who that will be, it's anyone's guess as they have kept a pretty tight lid on all things surrounding the movie. EW ran a really nice interview with Wes Craven that accompanied the poster. While scant in specific details, he did reveal that they will be poking fun at what they call "sequelitis," the unnecessary explosion of sequels that horror movies get these days.

Now, if only they can get Alanis Morissette to sing "Ironic" as the theme song. Are you circling April 15 on your calendar?