Trailer for 'Eclipse' shows violent side of Twilight franchise 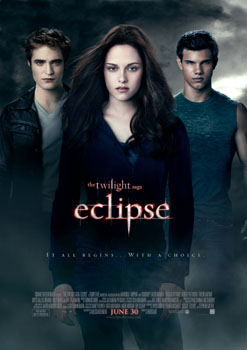 I will offer up a confession. Yes, I've seen both Twilight movies in theaters on opening day, without having read the books.

Before you cast me in the pit of movie taste despair, you should know that I attended both said movies in the company of a dozen or so co-workers of the fairer sex and under the influence of several strong margaritas. That all being said, blame the alcohol if you will, but I didn't think that either Twilight or New Moon were all that bad.

Sure, they were brooding and catered strongly to the female gender, notably those under the age of 16, but still, there was enough interesting vampire and werewolf action to keep he average red-blooded male happy. Well, if you're like me or were dragged to see the first two by your significant other, then you're in luck.

It seems that the fine folks at Summit are marketing Eclipse towards you. Either that or it's simply a bait and swap ploy to fool us into thinking that there won't be five minute montages of Bella staring out a window at nothing in particular.

No, this trailer, which yes debuted on Oprah on Friday, is all about vampire on vampire and werewolf on vampire violence. It's promising to be the Gettysburg or The Two Towers of the Twilight franchise. Of course, no real violence or blood will be shown on the screen in order to preserve its PG-13 rating, but still there's hope.

Take a look below and let us know what you think. The Twilight Saga: Eclipse hits theaters on June 30.