'Hurt Locker' is the feel-good winner at this year's Oscars 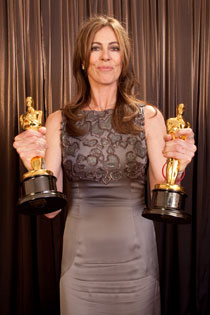 Kathryn Bigelow celebrates with the two new men in her life. Â©AMPASÂ®

The Academy shone its light on a wide variety of movies at the 82nd Annual Academy Awards but none as bright as that for The Hurt Locker. The Iraq war drama took home six Oscars including Best Picture.

Kathryn Bigelow became the first woman in the history of the awards to win Best Director. The film also won for Mark Boal's original screenplay and for prizes in film editing, sound editing and sound mixing.

The other big winners of the night were Sandra Bullock, who gave a tearful speech upon winning Best Actress for The Blind Side, and Jeff Bridges who dedicated his win for Crazy Heart to his showbiz parents.

Here are the winners in all categories: