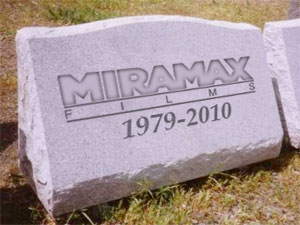 Disney officially shut down the Miramax line today with little to no fan fare bringing an end to the label that epitomized the underdog mentality when its movies Life is Beautiful, The Piano and Shakespeare in Love (among others) pulled off incredible Oscar upsets.

But Miramax, especially under the watchful eye of Bob and Harvey Weinstein, was more than art house studio as Brodie rightfully pointed out in Jay and Silent Bob Strike Back. Its lasting impression upon the fabric of American cinema will be the Weinstein brothers' uncanny ability to find and develop amazing filmmakers and storytellers.

Quentin Tarantino and Kevin Smith would probably still be toiling away at odd jobs in Tennessee and New Jersey respectively and not making great movies. While today marked the official "death" of the company, its spirit left when Disney had a very public feud with Bob and Harvey that ultimately resulted in the brothers starting their own studio, The Weinstein Company.

Industry site The Wrap actually got a lengthy quote from Kevin Smith about the passing of Miramax. You need to read the whole thing, but my favorite part is below:

I was never a brand-name whore in my life, except when it came to indie film. And from the moment I knew I wanted to be in film, there was one label I wanted on my ass: Miramax.

One place that Miramax was a staple every year was the Sundance Film Festival where they seemingly bought hit after hit for years. Ironically, tonight, yours truly will be going to Sundance, sort of.

Actually, Sundance is coming to me in the form of their new satellite program where they are taking films to a few key theaters across the country to screen the movie and then do a Q&A with the filmmakers.

Tonight, I get to check out The Extra Man and filmmakers Shari Springer Berman and Robert Pulcini will be in attendance. You can follow my exploits on our Twitter feed.