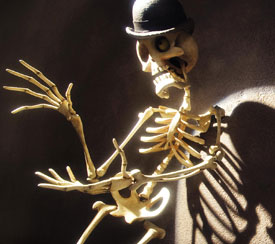 Do you remember which of the movies this is from?

We may get caught up in the gore and horror that makes Halloween fun for adults but it's important to remember that the holiday is really about the kids. Dressing up in costumes and trick-or-treating are among my favorite childhood memories. I hope that will be true for my young kids as well.

Thankfully, Wired's Geek Dad blog (or "Eeeek Dad" are they've redubbed it this week) has a list of the Top 10 Halloween Movies for Younger Kids. Watching scary movies is a big part of the day and these are some appropriate flicks for the little revelers who still want to sleep at night.

Here is the list. I've included my own notes and some of the content warnings they included. Their site has even more descriptions and explanations on each.

As much as I like The Nightmare Before Christmas, my personal favorite among these has to be the Wallace & Gromit film. It's a stop-motion masterpiece.

Speaking of stop-motion, I'm surprised they didn't include Coraline. It's an amazing film in its own right. However, my seven-year-old daughter did get scared when we saw it in the theater. (She was more comfortable watch it again at home.)

Are there any other kid-friendly scary flicks you'd recommend? Anything this list forgets? They do mention It's the Great Pumpkin, Charlie Brown in the preface so that's not exactly on omission; it's an obvious selection. I'd add the 1990 Anjelica Huston starrer The Witches. Send in your suggestions.

Thanks to everyone who sent in their picks. The overwhelming choice was 1993's Hocus Pocus. Silly of me to forget this one as last weekend also saw the release of the concert film Michael Jackson's This Is It directed by auteur Kenny Ortega.