David Fincher is one of the most underrated movie directors. He's held in high esteem but not high enough in my opinion. I think he should rank ahead of contemporaries like Quentin Tarantino and Wes Anderson.

Check out his resume:

Seven simply blew me away when I first saw it. In fact, it still ranks as one of my favorite movies of all-time. The Game is very much an under-appreciated film.

Fincher has The Curious Case of Benjamin Button with Brad Pitt coming this Christmas.

In the November issue of Empire Magazine (the same one with the Top 500 Movies), they have a preview of his upcoming film. The British film mag even got David to write down his favorite all-time movies. Here is the hand-scrawled note as featured in Empire. 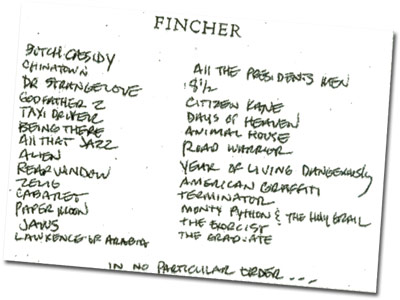 In case you can't decipher his handwriting, here is that list in alphabetical order:

You want to become a film director half as good as Fincher? Devour these movies as part of your own unofficial David Film Film School. Add a truckload of your own talent and you'll be on your way to greatness.

Source: The Work and Genius of David Fincher