What's the reason behind the 'Harry Potter' and 'Twilight' date changes?

Hollywood has begun a mad game of movie musical chairs. As studios change release dates for several highly-anticipated fall releases, one has to wonder the motives for the moves.

Warner Bros. started things on Thursday with an announcement that its Harry Potter and the Half-Blood Prince will be moving to a July 17, 2009 release. The sixth Harry Potter adaptation was previously scheduled for a Nov. 21 debut. 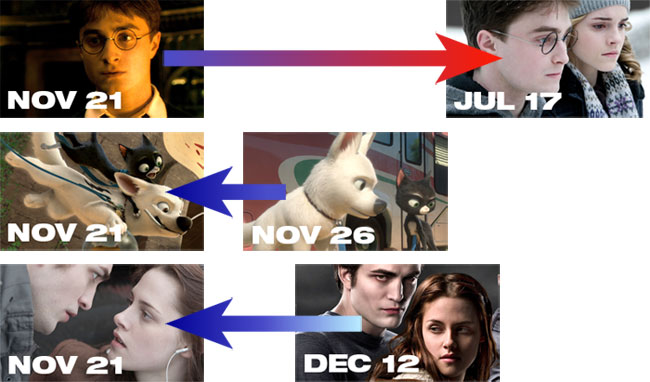 Of the switch, WB president Alan Horn had this to say:

"Our reasons for shifting 'Half-Blood Prince' to summer are twofold: we know the summer season is an ideal window for a family tent pole release, as proven by the success of our last Harry Potter film, which is the second-highest grossing film in the franchise, behind only the first installment. Additionally, like every other studio, we are still feeling the repercussions of the writers' strike, which impacted the readiness of scripts for other films--changing the competitive landscape for 2009 and offering new windows of opportunity that we wanted to take advantage of. We agreed the best strategy was to move 'Half-Blood Prince' to July, where it perfectly fills the gap for a major tent pole release for mid-summer."

Shortly after vacating the Nov. 21 date, Disney moved its digitally animated movie Bolt into Harry's old spot. The film featuring the voices of John Travolta and Miley Cyrus was going to open five days later on the day before Thanksgiving.

In perhaps the biggest move of all, new kid on the block Summit Entertainment backed up its teen vampire flick Twilight from its original Dec. 12 to join Bolt on Nov. 21. Summit CEO Rob Friedman made this comment about the change:

"When Warner Bros. decided to move Harry Potter and the Half-Blood Prince to the summer of 2009, we saw a unique opportunity to slot in our film which has been gaining tremendous awareness and momentum over the past several months. We by no means are trying to fill the shoes of the incredible Potter franchise for 2008, rather we are just looking to bring the fans of Stephenie Meyer's incredible book series the film as soon possible from a programming perspective."

As the young studio mentions in its statement, the new date allows Twilight to open in more theaters "prior to the holiday movie-going season where traditionally screen time for any popular film is limited." It was previously estimated to only be on around 2,500 screens with the Dec. 12 release.

Reasons for the move

OK, now for the juicy stuff. Why exactly did Warner make this move? Yes it's true that the film will reach a wider audience in the summer months but will it make more money for the studio next July than it would have this winter?

It's out of the frying pan and into the fire, it seems. The weeks leading up to next July have The Hannah Montana Movie, X-Men Origins: Wolverine, Star Trek, Angels & Demons, Bruno, Night at the Museum 2, Termination Salvation, Pixar's Up, The Fast and the Furious 4, The A-Team, Transformers 2, and Ice Age: Dawn of the Dinosaurs. G.I. Joe comes to theaters a few weeks after Harry Potter. Those films aren't exactly light competition.

An unspoken reason for the change in dates may be that Warner doesn't need the money this fiscal year. The Dark Knight is raking in the money at the box office having just passed Star Wars for the number two movie all-time with $471 million. That coin will continue to roll in when the caped crusader is released on DVD, presumed to be sometime in December. It makes better sense (and cents) to have Harry Potter on next year's books.

You also have to wonder if there were other competitive reasons for the movie. Did Warner feel the threat posed by Twilight, a film with a rapidly gaining momentum? You have to believe it did.

Fans of the young wizard are growing up. Many have moved on to a more mature story -- that of eternally young vampire Edward and his high school love Bella. Warner didn't want to go all in on a pair of Kings only to have Summit sitting back with pocket Aces.

It could have been a warning sign for Warner Bros. last year when the third book in the Twilight series "Eclipse" knocked "Harry Potter and the Deathly Hallows" from the top of the best-sellers chart.

The big winner in this movie has to be Summit and Twilight. (Disney's Bolt seems to just be collateral damage in this wizard versus vampire battle.) The studio has to be ecstatic that their big movie gets a much better release date with a bigger opening and they get Harry Potter moved out of the way.

The studio's excitement can probably only be matched right now by that of Twilight fans themselves. They get to see the book on the big screen a whole three weeks earlier.

We previously dismissed Twilight's chances to break the box office records of Titanic and The Dark Knight. With these moves, perhaps a run by Twilight on theatrical records isn't out of the question.

And guess who holds the record for best holiday opening weekend? Fittingly enough, it is Harry Potter and the Goblet of Fire with $102 million in 2005.