A star is born in 'Dewey Cox'

When you say the name John C. Reilly to the average person, they usually give a blank stare and ask you if he was the guy that shot Ronald Reagan. You say "Shake and Bake" and the cloud is lifted.

You see up until now, John C. Reilly has been the consummate supporting actor, even garnering an Academy Award nomination for said services in Chicago, but never the household name that his acting talents demand. Sure, you would recognize his face when you saw it and say, "Oh, that guy!"

Well, that time is over folks. Thanks to the boys behind the comic gems The 40-Year-Old Virgin, Knocked Up and Superbad, John C. Reilly is about to become a leading man in the sure-fire Christmas comedy hit Walk Hard: The Dewey Cox Story.

The film is a spoof of big musical bio-pics of late such as Walk the Line and Ray. But, unlike most spoof movies that are nothing more than a string of crude jokes, Walk Hard actually develops character and plot along the way.

It's a spoof with a heart of gold.

Sure, it's hard to think of the dramatic upside of a movie that starts out with one brother chopping his brother in half in a freak machete fight accident, but thanks to Reilly it works. Instead of playing him as just a hapless loser (which he is), Reilly elevates him to the status of lovable loser and by the end of the movie, you actually find yourself cheering for the man that Dewey Cox becomes.

John C. Reilly accomplishes this by completely throwing himself into the character. This is evident by the "Cox Across America" tour that Sony is throwing to help market the movie ahead of its December 21st theatrical release. 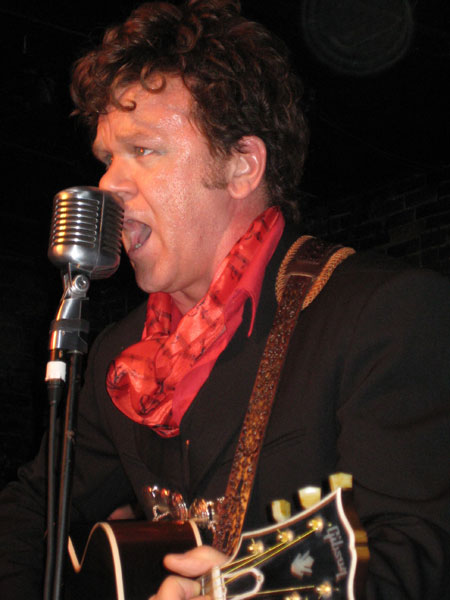 In select markets, the movie is being screened followed by a special concert featuring Dewey Cox and the Hard Walkers. On Saturday night, Nashville was the tour stop and this reporter was one of the select few in attendance.

To say the movie rocks is a very punny understatement. It will require repeat viewing to get all the jokes as the raucous laughter often bleeds into the next one-liner. Besides the obvious star-making turn by Reilly, SNL vet Tim Meadows finally makes himself relevant again as the drug-enabling drummer of the Hard Walkers.

Producer, writer and smartest person in Hollywood, Judd Apatow has another hit on his hands and continues his golden touch. But the real cherry on this spoof-tacular sundae was the concert that followed.

Dewey Cox came out and entertained the standing room only crowd for an hour and 15 minutes with a non-stop set of his hits sprinkled with a few tongue-in-cheek covers. Notice I didn't say John C. Reilly, that's because he was completely in character from the first note to the last bow.

It takes a special performer to be able to sing and improv comedy under the guise of a legendary singer. And for that night, not a single audience member doubted that they were seeing a legend that shared the stage with Elvis and the Beatles.

The Music City has seen its fair share of lyrical history and another chapter was added when Cox covered Eric Clapton's "Cocaine" followed by Amy Winehouse's "Rehab." But the real topper of the evening was the closing number when Dewey Cox serenaded the audience with his new holiday classic, "For Christmas, the People Want Cox."