Look inside the ingenious DVD packaging for 'Van Wilder 2'

The people who design the DVD packaging at Twentieth Century Fox Home Entertainment certainly are earning their keep these days.

Those guys and gals caused quite a stir recently with their DVD case for Borat. The case was presented entirely in Kazakh and the disc label looked like a bootleg copy on a generic DVD.

Perhaps not quite as bold as those moves, they've struck again with the packaging for Mar. 27's unrated DVD of Van Wilder: The Rise of Taj. They've taken the pretty-much-standard cardboard outer shell (called an O ring) and created a package that's sure to be picked up off the shelf.

From a distance it seems that Taj (Kal Penn) is holding a "Unrated" banner to cover his naked friends standing on either side. Your instinct is to pick up the case and remove the die-cut O ring to see what lies underneath. Revealed are the ladies -- in bikinis -- and the beer-can-crushing bulldog Balzac.

It's a simple trick (one Fox also employed on the unrated DVD for The Girl Next Door but this one is much more effective. Bravo, Fox.

Be sure to check it out for yourself when Van Wilder: The Rise of Taj hits DVD on Mar. 27. 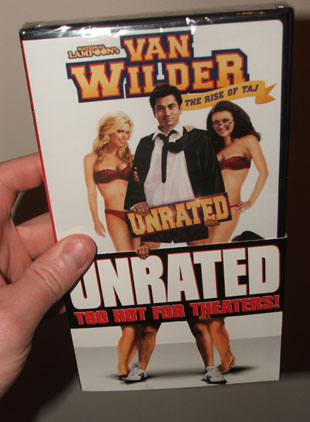 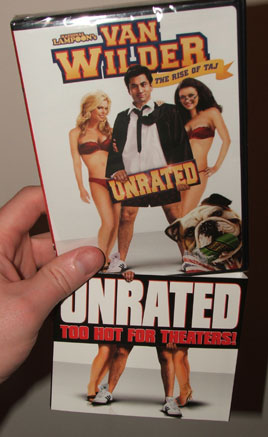