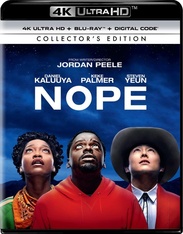 Jordan Peele reimagines the summer movie with NOPE, an expansive epic of uncanny science fiction. Following their fatherâs shocking death, Hollywood animal wrangler OJ (Kaluuya) and his sister Emerald (Palmer) begin observing unexplained phenomena on their vast Southern California ranch that leads them down an obsessive rabbit hole as they plot attempts to capture the mystery on camera. Along with a former child star turned family theme park ringmaster (Yeun) who neighbors the siblings, the pairâs efforts to chase the spectacle soon bring terrifying consequences and unimaginable horror. The result is a complex social thriller that unpacks the seeds of violence, risk and opportunism that are inseparable from the romanticized history of the American West â¦ and from show business itself.

Rated R for language throughout and some violence/bloody images.