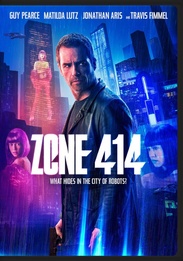 Guy Pearce, Matilda Lutz and Travis Fimmel star in the sci-fi thriller set in Zone 414, a dangerous, dark colony of humanoids known as âthe city of robots.â The colonyâs creator (Fimmel) hires private investigator David Carmichael (Pearce) to track down his missing daughter. David teams up with Jane (Lutz), a highly advanced A.I. equipped with the same technology of her fellow humanoids, but with all the emotions, feelings and dreams of a human being. They travel through the city uncovering clues and a crime that calls into question the origins and true purpose behind the city of artificial humans.

Rated R for violence, disturbing images, language, some drug use and nudity.