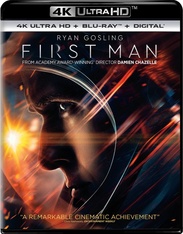 On the heels of their six-time Academy Award®-winning smash, La La Land, Oscar®-winning director Damien Chazelle and star Ryan Gosling reteam for Universal Pictures First Man, the riveting story behind the first manned mission to the moon, focusing on Neil Armstrong and the decade leading to the historic Apollo 11 flight. A visceral and intimate account told from Armstrongs perspective, based on the book by James R. Hansen, the film explores the triumphs and the coston Armstrong, his family, his colleagues and the nation itselfof one of the most dangerous missions in history.