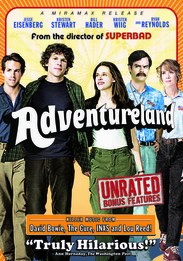 From the director of Superbad comes Adventureland, a smart, witty comedy we can all relate to. When James Brennan (Jesse Eisenberg) has to cancel his dream summer vacation and make some money for grad school, the only job he can get is at Adventureland, a tacky amusement park where the games are rigged and the rides make you hurl. But itâs where he meets Em (Kristen Stewart, Twilight), and his rollercoaster ride to nowhere turns into the best summer ever.

Rated R for language, drug use and sexual references.