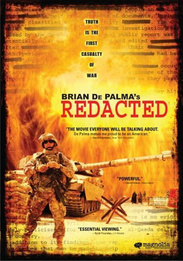 A fictional story inspired by true events, REDACTED is a unique cinematic experience that will force viewers to radically reconsider the filters through which we see and accept events in our world, the power of the mediated image and how presentation and composition influence our ideas and beliefs. A profound meditation on the way information is packaged, distributed and received in an era with infinite channels of communication, REDACTED utilizes a variety of created source materialâvideo diaries, produced documentary, surveillance footage, online testimonials, news piecesâto comment on the extreme disconnect between the surface of an image and the reality of ideas and the truth, especially in times of strife. Centered around a small group of American soldiers stationed at a checkpoint in Iraq, REDACTED alternates points of view, balancing the experiences of these young men under duress and members of the media with those of the local Iraqi people, illuminating how each have been deeply affected by the current conflict and their encounters with each other. The charged apotheosis of Brian De Palmaâs filmmaking career, REDACTED caps off a body of work which has explored the politics of image-making and reception more fully than any living filmmaker.

Rated R for strong disturbing violent content including a rape, pervasive language and some sexual references/images.