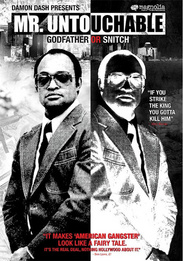 The true-life story of a Harlemâs notorious Nicky Barnes, a junkie turned multimillionaire drug-lord, MR. UNTOUCHABLE takes its audience deep inside the heroin industry of the 1970s. The most powerful black drug kingpin in New York City history, Barnes came from humble beginnings to make himself and his comrades rich beyond their wildest dreams, ultimately reaching national infamy in 1977 when the New York Times put him on the front cover of their magazine with the headline âMr. Untouchableâ. Soon after, it all came crumbling down, and facing a life sentence without parole, Barnes started naming names. With the first hand testimony from âthe black Godfatherâ himself, this documentary tells an epic story of business, excess, greed and revenge.